Because my vote actually counts for something

You'd have to live under a rock these days not to be aware of the upcoming presidential elections, and it seems like every time I turn on NPR (my go-to radio station for the drive to and from work), it's another story about someone's campaign, or some gaffe, or finances, blah blah blah. Yes, I care, but most of the time it feels like as an individual, I can't make a difference in politics at that level. I am absolutely there to vote in every election, but let's face it, I'm on the wrong side of the ticket in a very conservative state.

However, politics in our small town of 400 is very, very different. Here, every individual has a voice, literally. You can stand up at the podium in town hall, in front of the council, mayor, and other citizens, and voice your opinion. You can argue with other citizens. If you manage to sway the council members who actually make the vote, then you have just made a difference in the law. Ok, yes, it's for a small town, but the point is that you can actually have a say in politics. Heck, I could run for city council if I wanted! That is just too cool.

Anyway, we have an election next month for the mayor and two city council positions. This year, the hot topics of conversation are the city's water supply (we have an old well, but we also get water from the LCRA), the long-range financial plan (we don't have one), and, for us, whether horses will continue to be welcome in the city.

Two of the three individuals running for city council are horse owners, and keep their horses here in the city. Both of them live on our street, and we know them reasonably well. One of the candidates for mayor is a horse owner, but we don't know her at all. Tonight was meet the candidates night, and given the recent bruhaha around horses and how much the next elected officials could potentially affect our lives, we decided to go.

So we sat and listened. The candidates are really pretty similar in their views. Whether they are conservative vs. liberal isn't terribly obvious given the topics at hand, and frankly I don't care, as long as they make decisions that are going to be the best for the majority of the citizens in our city. It was also interesting to hear some of the people who asked questions - some were inflammatory toward our current mayor (who is running for reelection), some were sympathetic to her. Some folks were clearly "nosy neighbors" - one guy put up a slide show about a 12 inch deep hole on the trail that hadn't been filled in for a WHOLE WEEK, and he wanted to know how candidates would handle that sort of issue in the future. FFS, really? I guess there's at least one in every crowd! This same guy happens to be on the zoning planning committee, and that's the committee that will make the recommendation to the council about what to do about horses in town. Oooooh boy. We met some new folks, chatted with some that we already knew, and generally got the feel of things.

I remember the first time I voted in a national election, I chose my candidate solely on a single issue that was (and still is) very important to me. It's the sort of issue that if the candidate didn't support it, I wouldn't even consider voting for them. Well, I'd like to think that I'm a more thoughtful, considerate voter these days, who considers the whole "package" of the candidate rather than a single issue. Alas, in reality, our town's election all comes down to one issue for me: who is going to support my right to have horses on my own land. Kind of funny when you think about all the issues that will sway voters on at a national level - healthcare, the economy, the jobless rate, etc. Here I am, most concerned about keeping my horses at home. 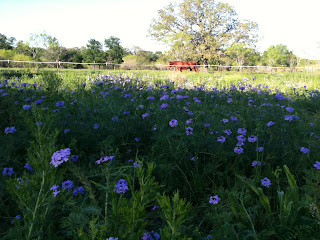 I guess it puts things in some sort of perspective?
Posted by jenj at 11:18 PM

Labels: caring for the land, politics