It seems like we've been doing spring cleaning/tidying since, like, February. Mostly because it got warm then, so we've been outside doing yard stuff ever since.

With the warmth and the rain (we're still in drought, just not as severe), it seems like we can't keep up with mowing, and the horses can't eat fast enough either. To make matters worse, we managed to shred the drive belt on the mower, and naturally we have to order a new one online since Lowe's and Home Depot don't carry the belt for our model tractor.  So, hubby finished whacking down some nasty thistles (before they went to seed) with the bushhog attachment on our weed-whacker. Not the most efficient method, but it works. 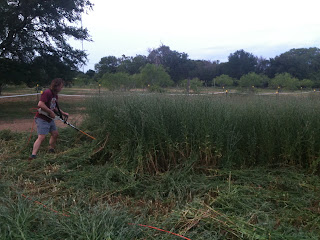 Picture it like a light saber, killing giant weeds.

We still have a bunch of other places that we need to trim, mostly around fencelines and such.  We're hoping to get it done before a massive storm system hits, but who knows if we'll make that timeline. There are so many other things to get done!

The composted manure has almost all been spread - I've got about 6 more wheelbarrows to go. The stuff we spread a couple of weeks ago has almost all been grown over, which is awesome! Tomorrow we're going to take the last of the uncomposted stuff to our friends who take our manure, and then we'll be able to start a new big pile to compost for next year. I just wish I had a better, less labor-intensive system for dealing with manure. I don't have a place to store manure for four horses for the 6+ months it takes to compost, and it's really quite time intensive to spread it, one wheelbarrow at a time, once it has finished composting. On the other hand, I really want to use the manure to put nutrients back into the soil. I've considered trying a couple of different options - manure spreaders (REALLY PRICEY!), using the chickens to speed up the compost and spreading process, etc. - but haven't gotten around to trying them. Maybe soon.

Speaking of chickens, we cleaned out the coop today. We spread the used shavings all over the back pasture, aided in part by very gusty winds! We used the spent hay that the horses have left around the track to re-bed the coop. We have quite a lot - apparently the boys have been picking the alfalfa and tastier bits out of the hay and leaving the rest. It's annoying to have so much wastage, but I guess we are reusing it as chicken bedding, after which it will go into the compost pile, so it all gets used eventually.

We also FINALLY pressure-washed the trailer. With the water restrictions for the drought, we haven't been able to wash any vehicles for over a year. While we're still under restrictions, we were able to quickly wash the trailer. Yay! 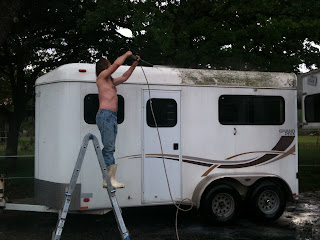 Dirty vs. clean. Makes a huge difference, no? (PS. My husband is awesome and I love him very much!)

A friend of ours had some volunteer cottonwood trees, which he very kindly gave us. The trees are native to Texas, grow very quickly, and are one of the largest North American hardwoods. We really wanted to plant some trees for additional shade, as well as to replace several trees which have died since we bought Wyvern Oaks. These guys should be 30 feet or so within 2-3 years, which will be fantastic! 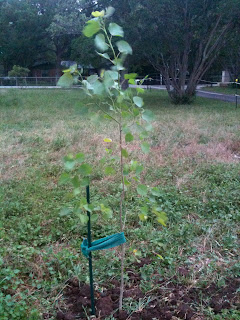 Already 6 feet, and it just sprouted this spring! 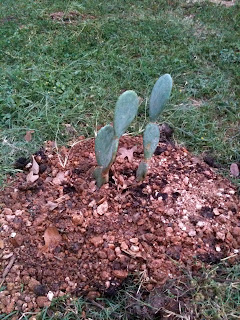 We also ended up with a few "blind" (that is, no spines) prickly pear cacti. They're a good start to our succulent planting! 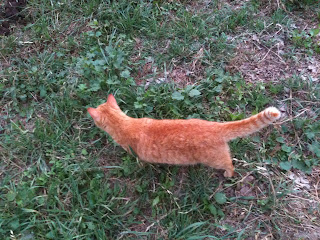 Maddy spent quite a lot of her day supervising. 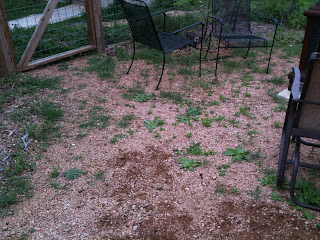 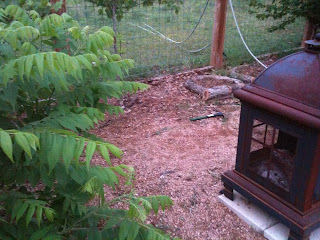 But it's looking better.

I also spent some time working on the garden. The onions were a big fail this year, only producing tiny bulbs. The broccoli grew really well, but produced tiny florets that promptly went to seed. However, we've had a bumper year for lettuce and spinach, so much so that we're pretty sick of salads. 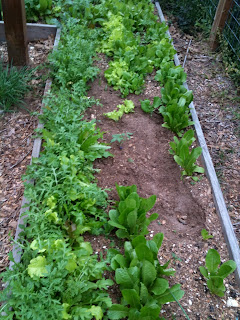 Lettuce, lettuce, and more lettuce. Good thing I have an excellent recipe for a homemade balsamic vinaigrette dressing! 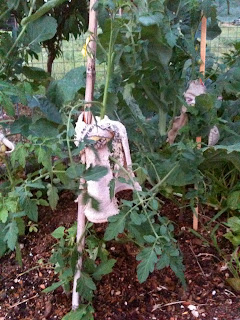 I had planned to purchase some tomatoes this year, but ended up with over two dozen volunteers and decided to go with them instead. Today I tied up the largest ones and moved some of the smaller ones around. It's a little challenging since I'm planting around the lettuce, which will soon go to seed when it gets a little warmer. 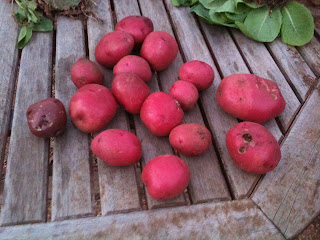 I also dug up the potato plants that weren't doing to well, and found 16 potatoes!!! Not too bad. I ended up replanting the potato plants in another bed, since each plant still had a number of little thumb-sized potatoes on it. Maybe they'll grow with a bit of TLC and more water (the original beds dried out too quickly).

Tomorrow we are supposed to go joust, but we've got severe thunderstorms, high winds, and hail forecast for the day. Somehow sitting in a thunderstorm, in metal armor, while riding a horse just seems like a really bad idea. If we end up staying home, it'll be more spring cleaning... inside, though!
Posted by jenj at 9:49 PM