How not to wear a flymask (and... jousting!)

Have you ever noticed how putting a flymask (the kind with ears) on a horse is sort of like putting clothes on a baby? Stuffing horse ears in the right spot is rather akin to trying to get baby arms and legs into the proper sleeve or pantleg - they're bendy and flexy and move quite on their own, often independent of where you want them to go. A bit of perseverance, though, and you'll get it eventually.

However, apparently SOME horse thought that I didn't get his flymask on properly this morning, and it required rearranging. 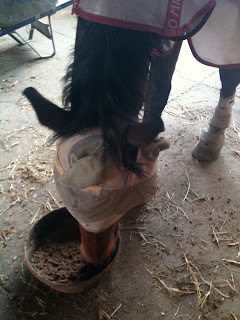 Saga is definitely not allowed to dress himself. Ever.

Now, on to the jousting part. Since hubby built a quintain at Wyvern Oaks, he's been out practicing on it almost daily - good thing too, since it's only two weeks till Lysts on the Lake, the big jousting competition. He's been working on getting Saga to run straight, keeping his rein hand low, and turning his body to target his opponent. The basic idea is to drop your lance into place and then let your opponent run into it, as opposed to trying to reach over and hit your opponent. It's hard to do from the back of a moving horse, especially one like Saga who is new to the sport. There's a lot going on, and it happens very, very quickly. 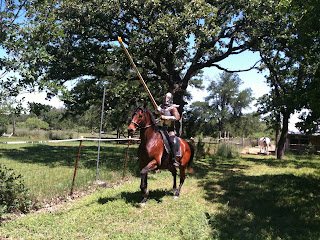 Saga's canter isn't as steady and rhythmic as it could be, and he's not straight. Hubby's hand is also much higher than it should be, which would ruin his shield presentation (causing it to go flat) if he had his shield on. 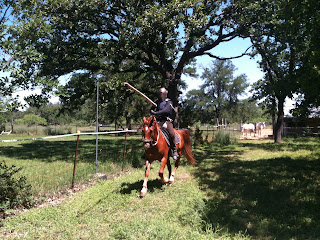 Reddums the Feerless War Pony demonstrates how to do it, with our friend NH aboard. NH commented on how easy it all is... nothing like having a made horse to do it on!

Sunday we hauled to the usual practice spot. I warmed Saga up for about 30 minutes before the hubby hopped on, which I think helped a lot. Saga had a few tiny issues with the armor, but settled right down. They started doing passes without lances down the lane, and Saga did really well. Hubby practiced lining Saga up and then just letting him go, instead of trying to control every step, which causes him to go sideways. He also worked on staying with Saga's launch, from halt to canter. It's much harder when you're wearing armor and your center of gravity shifts upwards 50 or 60 pounds.

Finally, NH put on some borrowed armor (he's new to the jousting thing, although he's a long-time and very good rider) and they got out the lances. They made about 6 successful passes with lances, and broke almost every time. An excellent successful practice! 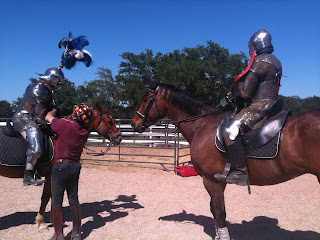 Last-minute armor fixes before the joust.

Of course, I don't have any actual pics of the joust since I was handling horses and lances. Oh well, there will be plenty of the real thing in a few weeks. 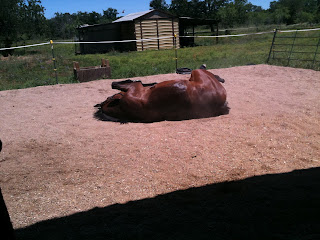 Back home, and Saga takes a well-deserved roll in the sand!

In case you're wondering why we're using Saga instead of Red to joust... Red is 14.2, and many of the horses that we joust against are 17+ hh draft horses. Here's what that looks like in an actual joust (bonus points if you can figure out which one is Reddums):

Basically, if the horses are more than about 2 hands in height difference, it becomes really difficult (and somewhat dangerous) to joust. Saga, at 16.2, is just about right. He can still joust against horses that are Red's size, with no problem, but he can also go against an 18 hh draft. Of course, if anything happens and Saga's not up for the joust, hubby will switch to Reddums. It just means he's got a more limited number of people he can go against.

Oh, and this coming Sunday I've got a dressage show. I think I'm taking Saga in Hunter Versatility as well as one dressage class. Too bad they don't have a jousting versatility class... we'd rock that one!
Posted by jenj at 10:24 PM