I don't often blog while on vacation, but I have shockingly good internet right now, so here goes!

Currently the hubby and I are in an agrotourismo about 20 kilometers south of Florence, Italy. The view is nothing but olive trees, vineyards, and extremely quaint towns with red-tile roofs. 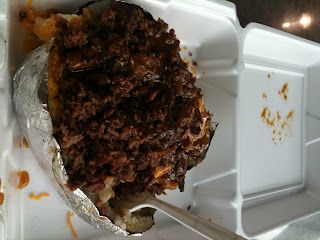 The trip started in Central Texas, with a "last meal" of a loaded baked potato smothered in chopped brisket and BBQ sauce. Only a few dozen calories, I promise! 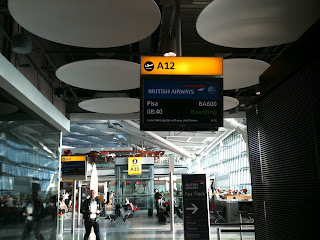 Next stop, London-Heathrow airport. All boarding to Pisa! (Nic, I waved in your general direction from here.)

Upon arriving at Pisa, I had to drive 70 kilometers north to meet my husband at a conference. It only took me 4 long, painful hours to make the trip. First, I had a detour to the east of Pisa (instead of west; silly me for following the signs), and then I got completely lost in Lucca, which is to the north. The map I had sucked, as none of the roads on the map were actually labelled. The directions I had were worse than useless, with instructions like "turn left on the Via della M. Civilite" - you see, in Italy all of the street signs are in tiny print on the corner of buildings, quite invisible from the main road - that is, if they exist at all! ARGH! 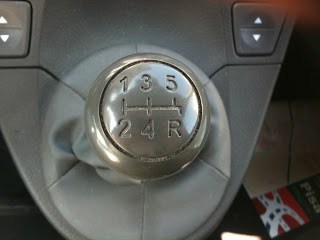 At one point I pulled over to check my map and directions, and then could not figure out how to get the fucking car into reverse to get out of my parking space. Tell me, how does this work? I ended up having to piece it together from the instruction manual in the car, which is in Italian. Have I mentioned that I don't actually speak or read Italian?

I tried to ask for directions multiple times, but it was during afternoon siesta (2-4 pm) so nobody was about. Of course my phone also doesn't work in Italy, except for texts, so my poor husband got texts with an ever-increasing number of four-letter words as I got more and more desperate. 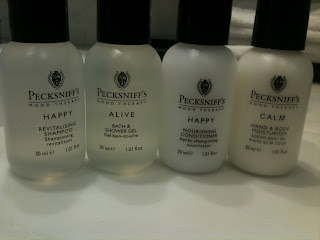 I did finally make it to the hotel, where I took a very long, very hot shower with the contents of these bottles: Happy, Alive, Happy, Calm. Yep, I needed that. 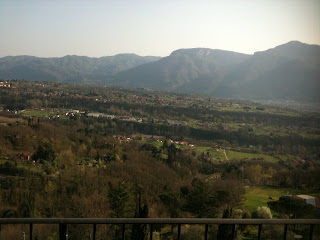 This view from the hotel balcony didn't hurt either. 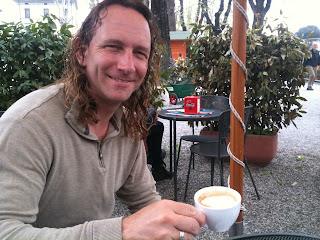 The next day, we traveled back to Lucca. I warned my husband about the dangers of getting lost there, but he didn't believe me... until we spent an hour trying to find the hotel, happily driving the wrong way down one-way cobblestone pedestrian-only streets. He had a cappuccino to console himself. 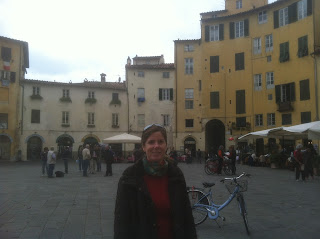 Much of Lucca is built on Roman ruins. This piazza is an old Roman ampitheatre - you can see the curved buildings behind me. They follow the old Roman walls. 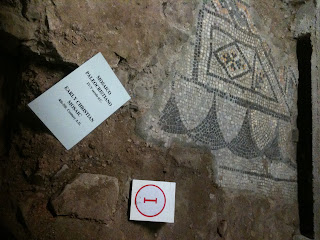 One of the duomos (cathedrals) we visited had an archeological dig underneath it. This mosaic is from the floor a 2nd century Roman bath, which had been built on top of a 1st century Roman villa. 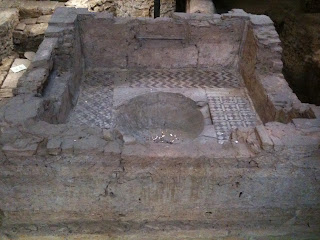 More of the Roman bath (the part in the center is a drain). 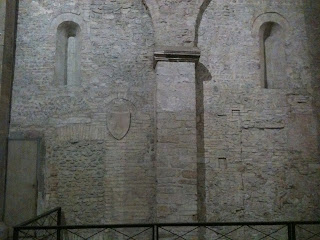 In this pic you can really see how the church evolved. On the bottom left there's a bricked-in door, you can see how different-sized stones ere used for different parts of the building, and the stone niches a the top used to hold statues. 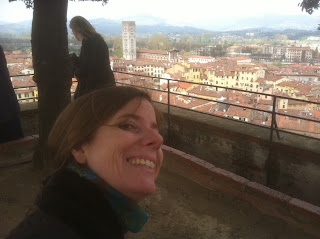 This part of Tuscany is famous for the towers in the cities. This one is Torre Guinigi, famous for the seven oak trees growing on top of a 14-story tower (with 227 steps). I thought I'd photobomb the pic. :) 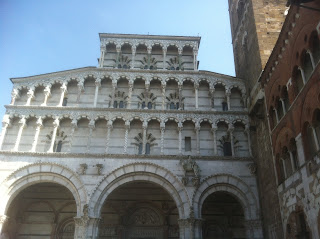 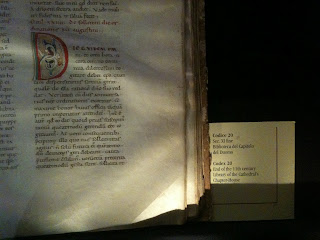 We found this 11th century manuscript in the duomo's museum. Can you believe that this book is over a thousand years old? Absolutely amazing! 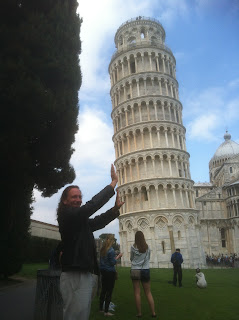 Next up, we went to Pisa for a quick tour of the leaning tower. Let me say that it REALLY leans. A LOT. Like, you wonder how it manages to stay upright, it leans so much. We of course had to take the standard tourist pic holding up the tower... 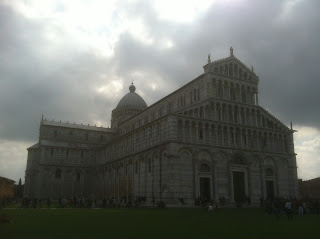 The tower is actually the bell tower for the duomo. The exterior of the duomo is bands of gorgeous inlaid marble from the nearby Carrera mines, along with fantastic carvings. Spectacular! 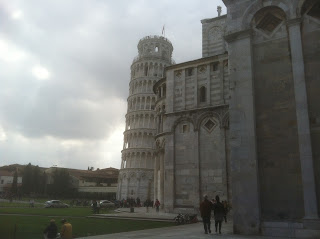 Looking at the tower from around the corner of the duomo. Another perspective on how much it's leaning! 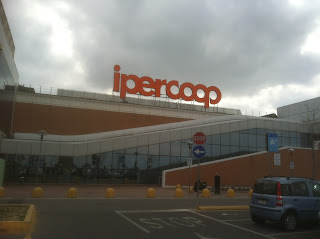 After Pisa, we stopped by the Ipercoop to shop. It's sort of a cross between a grocery, Wal-Mart, and Costco. We spent far too long selecting groceries for the next few days, but it was fun! MK, this picture is for you!


More later. Tomorrow we will visit Florence!
Posted by jenj at 4:26 PM