In which we find terra cotta, frescoes, and tirimisu

Yesterday we started off with a trip to a terra-cotta manufacturer in the area called MITAL. As is par for the course, the map didn't match the directions, so we drove in the general vicinity of the place we were trying to find, then ended up somewhere entirely different. 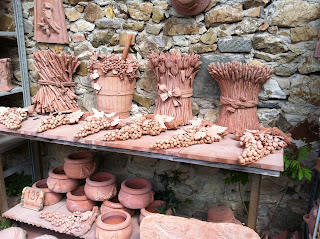 We found a guy who does incredibly creative things with clay, all one-of-a-kind and simply gorgeous (above). We ended up purchasing a wall plaque from him that depicts a scene of the Tuscan hills, with a monastery in the background.  Of course the plaque was wrapped before I had a chance to take a picture of it, so I'll just have to post it after we get it home and hang it on the patio wall. 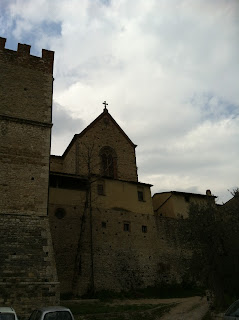 Naturally, we then had to visit the monastery in the scene, Certosa. 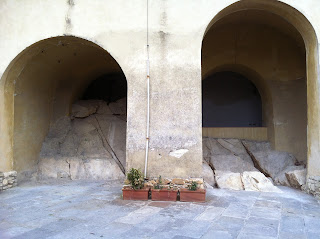 The monastery was built directly on the bedrock of the hill - it was pretty cool to see the chunks of hillside integrated into the building! 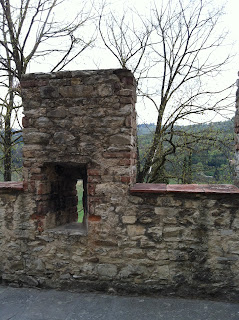 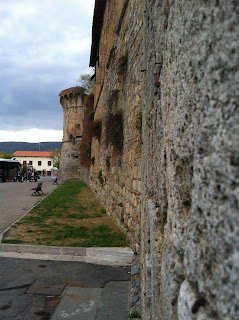 Next off, we headed to San Gimignano, also known as the City of Towers. 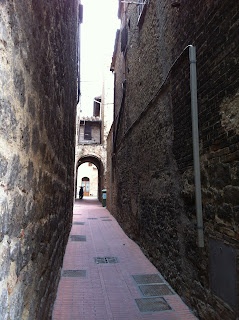 The old part of the town is pedestrian-only, which is pretty nice after a dodging crazy Italian drivers. Here's a cool tiny narrow alley side street with an archway. 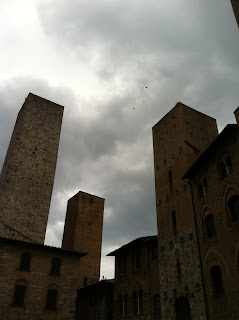 This picture was taking standing in front of the Duomo, in the main piazza. The town originally had at least 72 towers - I think there are about a dozen towers left. Apparently the wealthiest families liked to build tall towers to demonstrate their wealth and influence (apparently a medieval version of "mine's bigger than yours"). 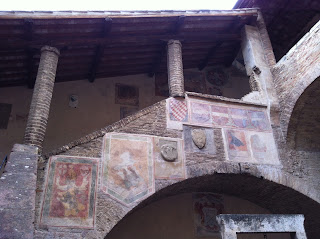 San Gimignano is a city full of 13th century frescoes. These are in a courtyard. Love the covered staircase too! 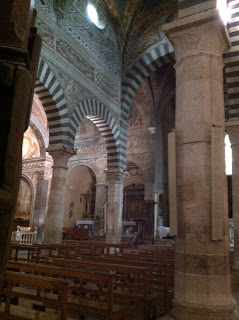 Almost every available surface of the inside of the Duomo is covered in more 13th and early 14th century frescoes. The black and white stripes are marble typical of the area. 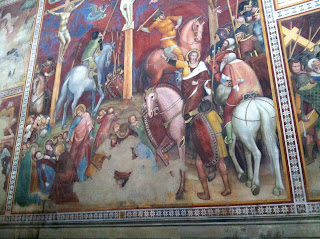 An illicit photo of one of the incredible frescoes (ssshhhh!). This one is of the Roman soldiers at the Crucifixion. 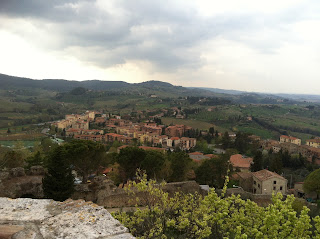 After the duomo, the hubby wanted to follow the signs to see the castle ruins. The problem castle ruins is that they are ALWAYS at the top of the hill. That's a lot of steps for a view - even if it is a really good view! 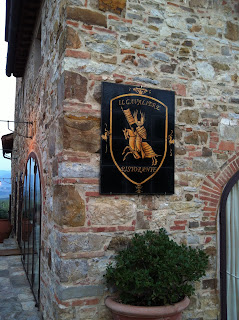 At the end of the day, we were hungry and looking for a place to eat on the way home. We unexpectedly ran across the Gabbiano winery, so we decided to stop for dinner. (We have a long history with Gabbiano wine. It was the first wine I brought to a dinner that hubby cooked, and today is our 5.5 year anniversary. It seemed fitting!) 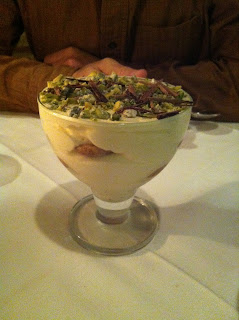 Our truly decadent meal was topped by an amazingly rich tirimisu covered in candied pistachios and chocolate slivers. Mmmmmm....
Posted by jenj at 3:17 AM