Cash is such a good schpotted pony

I've been a little down since getting home from our trip - Saga is lame lame lame, even just out in the pasture. His digital pulse has returned to normal (it was pounding before I left due to a change in feed, but I quickly changed him back), but now even boots aren't helping him much at all. So, I bit the bullet and made an appointment for Thursday with the vet farrier to get him shod in the front.

I know, I know. I'm still working out the nutrition angle, but even if I get everything perfectly balanced, it'll be months before proper nutrition lets him grow a sole that is thick enough for him to be comfortable. I don't have enough conformable surfaces to support him during that time, and I just can't stand watching him limp around the pasture. Shoes it is.

ANYway, I figured a ride would do me some good, so I tacked up Cash tonight and off we went. I decided to do a little real work with him, to see he how he's doing. Andrea's notes on cantering Pangea to warm her up reminded me that I used to warm Cash up with a little canter early on, so we did some nice long canters (both leads) on a good straightaway on our way to the arena. I could tell that the canters really helped him be more forward-thinking and supple right off the bat; I'll have to keep that in mind for future warmups.

We did a good bit of trot work each direction, mostly just 20 and 15 m circles. We did a little shoulder-in at the walk, then threw in a few canters each way. He felt really, really good - very responsive and quite forward, where lately he's been pretty lazy. He's stiff, yes, but he's going to be 24 this coming Saturday, so I'll cut him some slack! I had no problems getting him round even in just the sidepull, although to the left we had more trouble keeping it. We finished the ride with a few leg yield to canter departs, which were brilliant as always. He was maybe a little slower to depart on the left lead, but he was very uphill and balanced the whole time.

Damn, I love riding him!

He was a little warm after (it as 85 today), so we took the long way home. This involved passing up the trail to the short way home, and he then spent the next 10 minutes trying to convince me that I'd made a terrible mistake and we were LOST IN THE WOODS and were going to DIE. 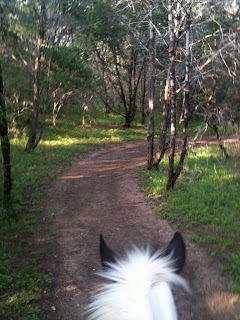 Are you SURE this is the way home? I think that time driving in Italy has really messed with your sense of direction, mom.

I've been toying with the idea of going to a schooling dressage show at the end of this month. I could take Cash and Red if I can't take Saga - it would be fun to see if we can fake out the judge with a gaited horse. I'm trying to convince MC to ride Cash regardless... we'll see!
Posted by jenj at 9:49 PM