I don't want to and you can't make me

Paddy's rehab has been trucking along. I've lost track of how many minutes we're trotting now, but we've been doing mostly straight lines out on the trails, at a very slow pace. I think we're supposed to start cantering in a week or so, but we'll see how things continue. If Paddy's leaping, bucking, and galloping out in the pasture is any indication, we'll be fine. 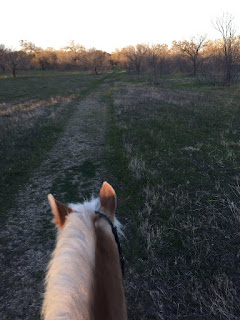 Heading out on the trail.

Last night, we went over to one of the flat fields where we work sometimes, so that we could actually trot some big circles and I could ask for "real" work. Problem is, certain Haffies have been off "real" work for going on three months now, and apparently they have no desire to be anything other than a trail-riding lawn ornament. 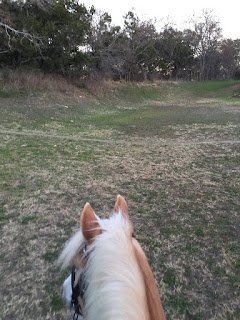 Me: A little more forward please.

Paddy: Too much effort. How about I hang my tongue out and put my nose on my chest? Nyaaaaaaa!

Me: (As giant glob of Haffie slobber from aforementioned tongue whapped me on the knee) FORWARD. 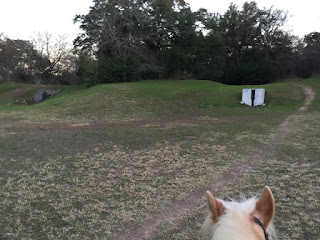 Giant culvert is not scary but that's the path home. Just FYI.

He tried running, he tried sucking back. He tried throwing his head, he tried pulling me out of the saddle. Everything (i.e. nothing) was more interesting than me, so he couldn't possibly focus on what I was asking for more than a second. He fell in, he fell out, he threw his butt over 5 feet when I asked him for a little bend. Anything to get out of working properly. I kept my hands down and quiet, elbows relaxed, leg on, and owned the inside rein. We quit when he was able to give me a decent circle in each direction. 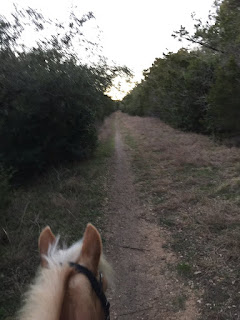 Normally we canter this stretch.

It's kind of funny how many evasions he can think up - he KNOWS what I want, but apparently coming up with the wrong answer is much more fun than doing it right. And his evasions are never dangerous, but they sure do keep me on my toes! 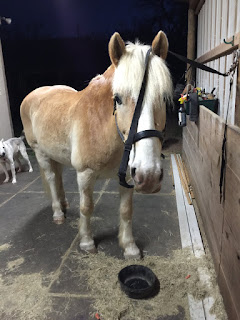 It's a good thing he's basically the most adorable thing ever. Otherwise I'd be posting a for sale notice.
Posted by jenj at 9:19 AM