I've been working Taran a lot on coming properly over his topline, and that's been going pretty well. As you could see in his confo shots earlier this month, the under neck muscle is going away and being replaced by muscles on top of his neck - where they should be!

However, in the last week or so he has developed this weird muscle on either side of his neck, just in front of the shoulder. See the lump? 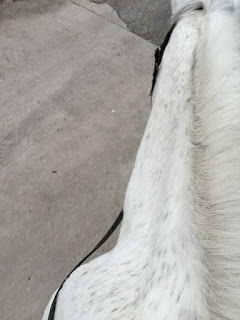 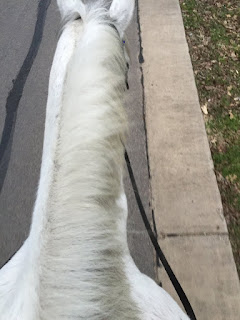 I've managed to create this muscle by using my hands incorrectly for bend. He tends to cock his head one way or the other (more to the right) instead of actually bending, and initially I was using my hand about a foot away from his neck to ask him to follow the rein. In a lesson about a week and a half ago, I was told that was too far - so when riding on my own I over-compensated and started using my inside hand toward my opposite hip. That motion has created this muscle in such a short time!

The answer (as discovered at my last lesson on Sunday) is to ask with my hand slightly away from his neck, so that I don't close the angle too much - but also don't drag his nose around with my hand over in space! Somewhere in the middle, lol. That muscle is already disappearing, and I'm doing stretches and a little massage to help it on its way.

Anyone else ever seen a horse with a muscle like this one?
Posted by jenj at 9:05 AM