Things that Taran is awesome at

It's been almost exactly two months since I started riding Taran seriously, and boy has he ever made progress in that amount of time. So much progress that I'm kind of blown away by him - this guy has a serious work ethic and he tries so hard to please. Top that off with him being fun to ride and making huge leaps of progress forward (and also sideways, shadows are dangerous) every time I ride him, and I can't wait to get in the saddle each day.

He's got a great work ethic
Taran's a bit on the lazy side, but he tries so hard and if I ask for extra effort, he tries hard to give it. He lives for those "good boys" and pats. Having a horse that really *likes* to work is wonderful.

He learns quickly
Two months ago, I couldn't keep him straight to save my life. His idea of bending was to crane his neck at a 30 degree angle to his body. He would fling his front end up into the air for every transition, and sometimes just because he didn't think he could go forward. Now, he understands how to bend his body from nose to tail. He knows that he can use his hind end for transitions instead of his front end (ok, this is a work in progress, but he gets the concept). He knows that he can move forward and stretch out and use his shoulder. He understands how I'm asking him to change how he uses his body and he seems to remember those things from ride to ride - I can pick up right where I left off on my previous ride and add to it. Assuming there are no terrifying deer or anything, of course. In that case, all bets are off. 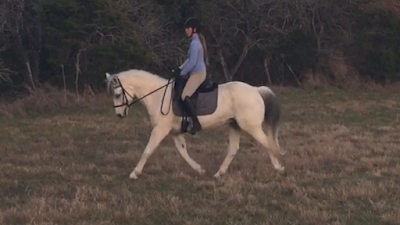 So much freer in his shoulder, and not a bad connection either!

He's got a natural tempo and he's balanced
These are the two things I struggle with most on Paddy, who requires micro-management to keep a steady tempo and not fall on his face. It's exhausting and you can't lose focus for a millisecond. Taran, on the other hand, is like a metronome. Even when I ask for baby lengthenings, he just stretches his frame out a little more instead of getting quicker. And despite being built pretty downhill, he sort of levels out under saddle and just carries himself right along. He still needs help and plenty of reminders to keep that hind end engaged and such, but he's not constantly running over his front end and going splat on his face. IT'S AMAZING I TELL YOU. I have no idea why Paddy can't do these things. 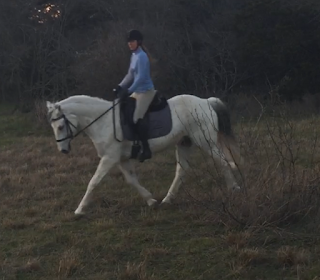 He looks a little downhill in this lengthening, but it's mostly the camera angle and the fact that I'm not helping him any. Look at how much he's stepping under!

He's steady in the contact
Paddy's very challenging because he actually likes a very light contact, and if you start taking more he starts to lean. That of course snowballs into a pulling contest, which I lose every time (you'd think I'd learn not to do that, wouldn't you?) Taran prefers a fairly heavy (to me) contact - it's like he wants to know I'm there at all times. Loss of contact means instant giraffe, but if I add leg and take up the contact, he's right there. He doesn't lean on me or ask me to carry him around, but he's very clear on how he prefers me to hold things. It's so interesting - if I took up that much on Paddy, he's start to pull and hang. For Taran, it's just right. 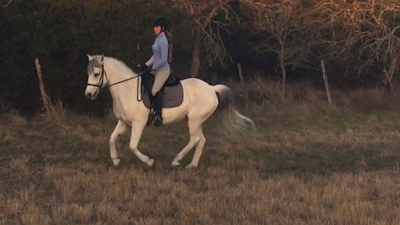 He's uncomplicated
Taran isn't a tricky horse to ride. He doesn't have any big evasions up his sleeves. If he's not straight it's because I'm letting him be crooked. If he throws his front end up it's because he feels blocked. If he doesn't step through with his hind end it's because I screwed up and didn't ask. The spookiness isn't naughty or trying to get out of work - I genuinely think he's got a vision problem (although the vet cannot find anything wrong, but identifying equine vision problems is difficult if there's not something visibly wrong with the eye). He's not a super physical ride either - he doesn't take a lot of core strength to hold together (unlike some Haffies I know), although he does take a good bit of leg. But overall, he's just a solid guy, and that makes him such a pleasure to ride!
Posted by jenj at 8:50 AM