Years ago, when I was eventing competitively, I remember galloping up to a Prelim fence and thinking "Holy sh!t, that's big!" before Cash launched us both cleanly over it. At 15.2, Cash was one of the smaller horses at most of the events we attended, and I envied riders on their big 17 hh horses. After all, a bigger horse would make the fences look smaller, right?

Then I got Saga, who was 16.2, and I discovered that with size sometimes comes a loss of maneuverability. Riding Cash was like driving a highly responsive sports car, whereas riding Saga was more like driving my F-350. Apparently, I'm more of a sports car girl.

So when I saw in Paddy's ad that he was only 15.1, I was ok with that. I mean, sure, I'm 5'8, but he's wide and takes up my leg. He's also super maneuverable, I can get on him without an extension ladder, and I never have to duck for those low-hanging tree branches. 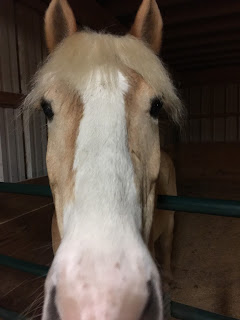 He's also adorable, but I'm sure that had nothing to do with the "love at first sight" thing.

But then I started riding Taran, and SOME PEOPLE (ahemmeganahem) kept referring to him as a "cute little pony". Literally, a pony. I pointed out that he's actually taller than Paddy, but nope, SOME PEOPLE kept saying that he was probably 14.0 hh and adorable. Because I'm a mathematical fact-driven kind of girl, I did what any rational person would do - I sticked him. 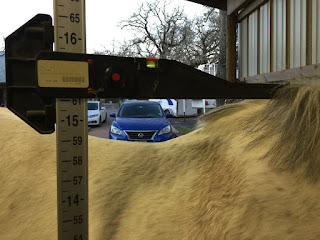 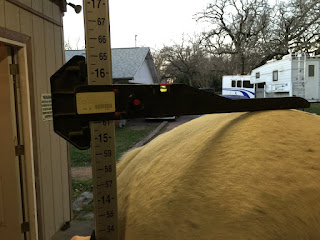 For funsies, I also sticked his butt, since we're constantly making fun of him for being downhill. He's maaaaybe a smidge downhill, but certainly not the inch we suspected. No more excuses there! 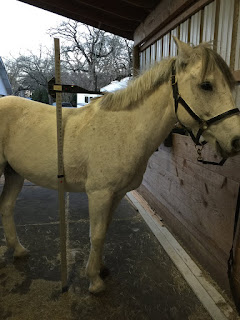 And just in case anyone claims that I might have somehow rigged this, here's proof that I didn't.

Oh, and you know who's not anywhere close to being 15.1? A certain Haffie. 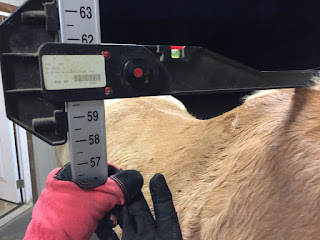 Uhm. Almost actually a pony?
Posted by jenj at 5:05 AM