Oh wait, we suck after all

Naturally, the awesome rides can't continue forever. Eventually something has to give.


Look at our canter from Tuesday. Our canter is great. Our downward transition, not so much, but there's always something. Why can we not do more of this canter?

Last night's lesson was so not what I wanted. Taran started out stiff, I started out too demanding. Having an agenda when riding is generally a bad plan. Riding Taran when it's dusk is also generally a bad plan, especially when all his buddies leave him alone in the arena just as it's getting truly dark. I never really got him truly connected, so our canter transitions were several steps back from where they had been. 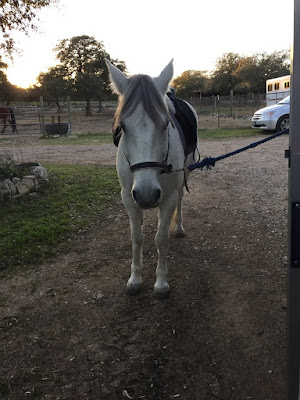 This is not the face of someone who really wants to play.

I had also decided to try riding in my saddle, since Fuzzypony's tends to put my leg on his shoulder instead of back where it should be. My saddle doesn't fit him as well, so he objected to me doing any form of sitting trot by doing his little hop-canters. Add that to the fact that I was working on not driving with my seat - which at this point means I am not coordinated enough to do anything else with any other part of my body - and we definitely didn't end on a good note. Blarg.

Then I switched tack and brought Paddy out, because he's far enough along in rehab that we can do a 30 minute w/t lesson. We did one last week, and he was super - those short trots on straight lines were just the thing to get him really listening and on the aids. Alas, last night he had his own agenda, which involved walking as fast as he could and ignoring me completely. We did circles. We did laterals. We did bending. He was having none of it - it was dark and he was alone and he couldn't possibly be expected to actually focus and work. We quit after 30 very frustrating minutes when we finally got a few supple bendy circles and I couldn't feel my fingers or toes because it was so cold. 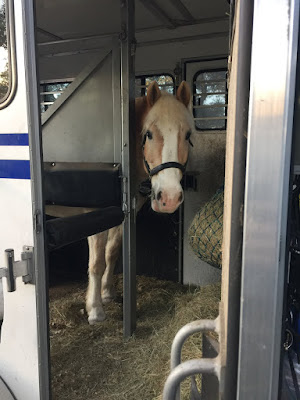 Sometimes cuteness is the only thing he's got going for him.

Ah, horses. The highs keep you coming back for more, the lows crush your spirit and leave you wondering if you'll ever get it halfway right.

Naturally, I have plans to ride all weekend - in hopes that we'll get it halfway right. :)
Posted by jenj at 9:24 AM