I mentioned in my post yesterday that after buying far too much at two amazing tack shops, Tanja took us to a show to watch the PSG rides. But this particular venue was quite special - not only was it just outside of Vienna, but there's a huge Rider's Lounge where you can order REAL food (nothing like American horse show food, yuck) while watching everyone ride.

But first, a tour of the grounds: 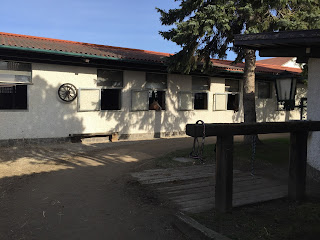 One of the permanent barns 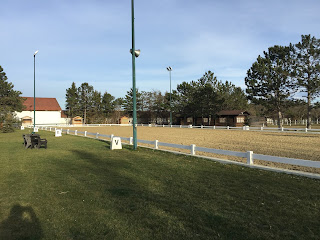 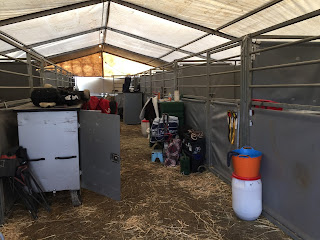 Inside one of the temporary barns 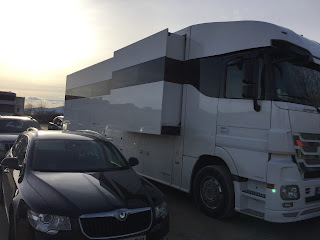 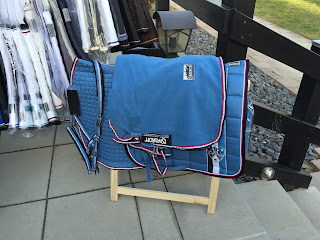 So much matching (no, I didn't buy it, sheesh!) 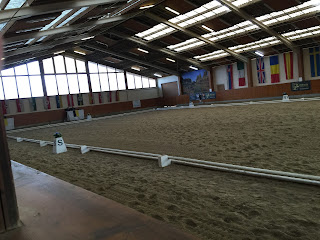 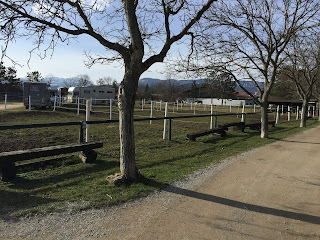 After a tour of the grounds, we headed in to the Rider's Lounge for lunch and found a spot to watch the warmup. 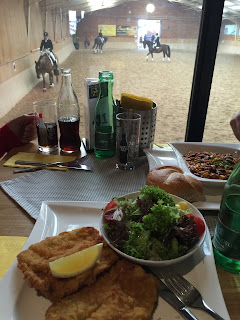 I need this at EVERY show. Schnitzel for lunch with a view of the ponies. WHY can't American horse shows be like this?!?!? WE ARE MISSING OUT, GUYS!!!

Warmup was... interesting. I don't often have a chance to watch upper-level horses go at the shows I attend, but I was surprised be a few things here. First, tophats! Most venues in the US require a helmet when mounted. Here, they don't care, and most riders were wearing the classic tophats. Second, not as much bling. Seriously, I see more bling on the AAs at First Level than I did here. I guess they spend all their money on the horses?

And of course, the frame that the horses were working in caught my attention. 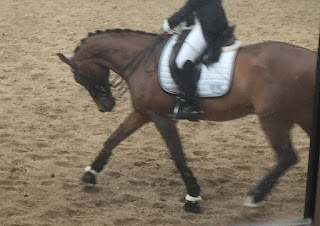 This is a PSG horse warming up 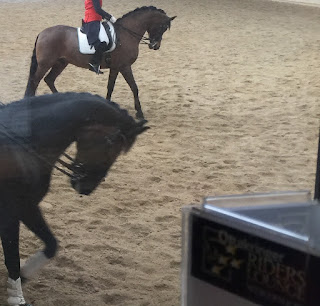 I'm not singling out these horses - I have no idea who they are, or who their riders are, and I've tried to remove identifying information. I just found it very, very interesting that while I've never seen horses warmed up this long/deep/round/rollkur/whatever you want to call it while the US, it's common here. They do ride the horses "up" for tests, however.

And speaking of the tests, watching these folks ride gave me some confidence. I have this image in my head of all upper-level riders being like Charlotte on Valegro, but the PSG riders have some of the same problems that I do, albeit on a grander scale. Most of them completely biffed the 10 meter circles. Halts were not square. Half passes were sometimes more like diagonal lines. One poor rider had a desperate time getting her horse back from extended canter. One horse had a pacey walk, and others were tense and jiggy and screamed for their buddies. My circles may be 20 meters and maybe I'm doing leg yield instead of half pass, but everybody seems to have issues, even when you're at PSG on a fancy warmblood. 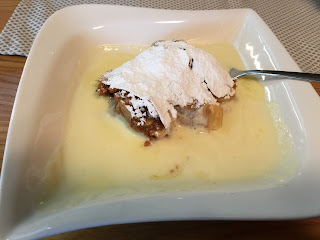 Watching rides while eating an Apfelstrudel for dessert is a whole new level of epic. 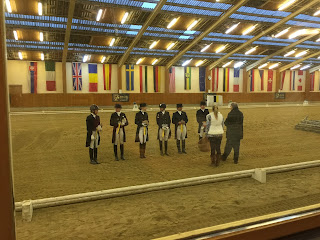 
All in all, a most excellent day. Thank you again, Tanja! I can't wait until my next visit (although my bank account needs some time to recover from the tack shopping). 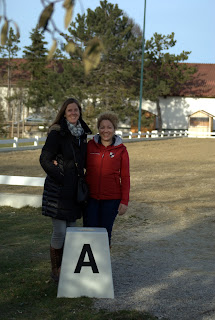 Enter at A! (Photo courtesy of DressageHafl)
Posted by jenj at 8:17 AM