Last night, our slow-draining tub finally decided it had had enough, and stopped draining altogether. Dammit.

Now, let me point out that these sorts of things ONLY happen when the hubby is out of town. If he's out of the country, whatever goes wrong is even more catastrophic. That's just the way of things around here.

However, our experiences with the new house have led me to believe that I can fix (almost) anything, or at least try, so I dug out the snake and some gloves and went to town.

First of all, I tried to run the snake down the regular drain. No luck there, it got caught on the stopper that's controlled by the overflow valve. However, not having done this before, I'm not as familiar with the anatomy of a tub as I perhaps should have been, but a quick call to my Dad remedied this problem.

So, to get around the stopper, you remove the overflow valve. That's this doodad: 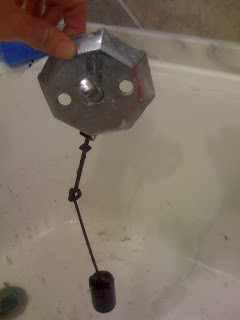 Overflow valve. When you take it off, unscrew one screw, the loosen the other one and check to see how well the overflow drain is put in behind your tub. Apparently some of them are pretty loose and can fall away from the tub if you take the screw out. In my case, the cast-iron overflow pipe was on there good and solid, so I just pulled the whole thing out. The blob at the bottom is the stopper. 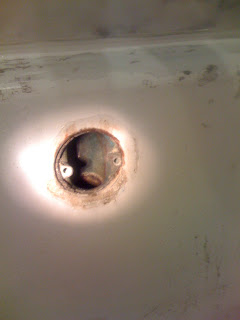 Here's what the overflow drain looks like after you've taken the assembly off. 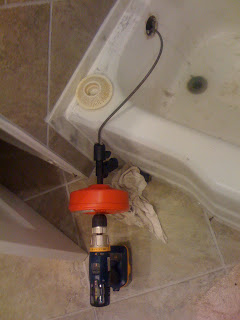 Next, I tried to use our 1/4 inch snake to snake out the drain via the overflow pipe. The snake attaches to a drill to make feeding it out and back in much faster. The problem I kept running into was that the end of the snake would hit something (I thought it was a right angle in the pipe, which I could see if I looked in the crawl space under the house) and then the snake would start looping on me. So, I wasn't able to pull anything out. 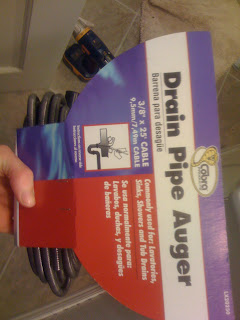 Another consultation ended in a trip to Lowe's for a slightly stiffer 3/8 inch auger. Unfortunately, I didn't have any luck with this one either.
So after about 2 hours of this fun, I called no joy and gave up. I couldn't get the end of the snakes to grab anything, and I thought they were getting stuck going around the first of the two 90 degree turns that make up the old-style P trap under our house. So, in desperation at 9:00 at night, I called a plumber.

BTW, if you need a plumber and live in the Austin area, call Jesse at ProLine Plumbing. He is AWESOME. We've dealt with him in the past and he's just fantastic - very professional and knowledgeable.

Jesse called me back early this morning and agreed to meet me during lunch to have a look at things. I described the situation to him, and he was concerned that we might have to pull pipes apart under the house (due to the age of the plumbing) if we couldn't get in there with a snake. When he arrived, I explained what I'd done, showed him my snakes, and we looked under the house. At first he told me that his snake wouldn't fit down my drains (I saw it and there was NO WAY) and to call a Roto-rooter type plumber. However, he decided to see if he could do anything with my 1/4 inch snake, and not two minutes later he pulled out a hairball.

AAARGH! On one hand, I was ecstatic - my tub was draining beautifully (you know, like tubs are supposed to). On the other hand, I was pissed - I hadn't been able to do that, and I had used the same tool! Jesse gave me a quick lesson in how to use a pipe snake, and it turns out I was using it a bit wrong. When you have a drill-style snake, the snake itself has a trigger on it. So, you feed out the snake using the trigger on the drill and the trigger on the snake until you feel blockage. Then you stop feeding out more snake, but still use the trigger on the drill to make it wiggle around in the pipe. That was my fatal mistake - I'd kept trying to feed out snake when I hit a block. Anyway, wiggle it around a bit, then pull it back out, and hopefully you've snagged something. As Alexis says, "it's all in the wrist."

So, my drain is clear and my tub no longer fills with water. Now, all I have to do is fix the tub spigot and make it snug to the wall - but that project is for another day.
Posted by jenj at 7:48 PM