Making use of the riding lawnmowers

It's starting to look a bit like spring around here. The days are longer and daylight saving time is just around the corner, it was 70 degrees for the third day in a row, and the buds are starting to come out on the trees. And of course, the grass is growing.

Now, the boys' 1/2 acre or so pasture has the look of a neatly-manicured lawn, if you don't look too closely. I've been able to more or less follow Salatin's "law of the second bite," which basically means to let your grass grow back some before a second bite gets taken out of it, or else it will have trouble reestablishing itself and its root system. With the rain we've had, the boys are in several days a week while the ground dries out, which means the grass gets a chance to grow back a bit. So, thusfar their pasture isn't really overgrazed.

However, two horses can eat waaaay faster than the grass can grow back in their smallish pasture. And meanwhile, the grass is getting higher and higher on the rest of the property. Now, I could get out the hubby's "garden tractor," except that I would have to figure out how to start the darn thing since he's currently out of the country. However, using it to mow would burn fossil fuel, take more time than I have, and waste the grass. So instead, I'm making use of the two four-footed riding lawnmowers. The only problem is keeping the semi-corralled so they don't get into areas where they could get hurt.

I started by snagging some step-in posts from the shed, along with some extra hot wire we've got. Then, I roped off a smallish area for them to munch on, with the assumption that once they're done mowing that area, I'll move them on to the next. After tying the hot wire into the main fenceline, adding a tub for water, and installing the boys, I stood back while they went to work munching: 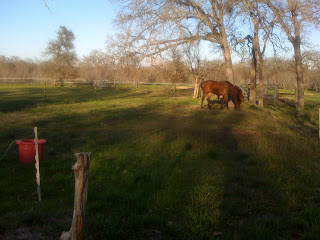 Yuppers, them's some mighty fine riding lawnmowers we got there. Hard at work, they are. 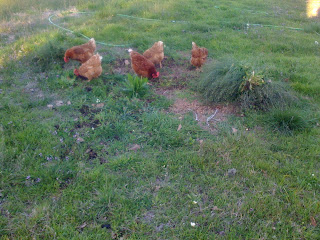 After I was done setting up the boys, I took the opportunity to thin out some weeds in the yard. The big pile on the right is a batch that I pulled in less than 5 minutes (no, I have no idea what they are). The girls were happy to move in and snatch any buggies that were disturbed by my weed-pulling efforts.
Posted by jenj at 7:32 PM