This morning we got a rather startling wake-up call.

At 7:30 a.m., the phone rang. I'd been awake since 6, but the husband was warm and snoogly and it was pouring down rain and thundering outside, so I probably sounded a little sleepy when I answered it.

"Hello?" I asked, not recognizing the number on caller ID.

"Ma'am? I have your dog over in the Lowe's parking lot." Lowe's is literally down three houses and across the (busy) cross-street from us.

My brain, still groggy, wasn't functioning well. I glanced down at Elias, our resident escape artist, but he was still fast asleep in his bed, tail tucked tightly over his nose.

And then I realize: the caller meant Anie.

"Um, GOSH. Um, we'll be right there. Thanks for calling!" I'm afraid I wasn't terribly talkative, still trying to reconcile that our normally placid Great Pyrenees, who had never wandered further than the edge of the property, had made it all the way across a busy street.

The hubby and I threw some clothes on, grabbed our rain gear and hats (did I mention it was pouring and thundering and lightening?), and were out the door post-haste. We hopped in the truck and sped to Lowe's... well, as fast as you can go in a big diesel truck, anyway.

You'd think a big poofy white dog wouldn't be too hard to spot, but we actually had to ask two people if they'd seen her. The second guy was the one who had called us and pointed us in the right direction; we thanked him profusely and drove off to find her.

Poor Anie was completely drenched to the skin, muddy, and clearly lost, wandering aimlessly just behind Lowe's. She wagged her tail when we called her name and took a few steps in our direction, then the hubby managed to pick her up (all 100 lbs of her, plus 20 lbs of water) and put her in the bed of the truck. I crouched down behind the cab and held her collar while the hubby drove us home, since she seemed very agitated and we were concerned she might try to jump out.

Once we got her home, we moved her bed into the tool shed (the one with a door) and left a heat light on with her food and water. She really doesn't like to be shut up inside, but it seemed the safest place for her since it was still thundering a bit and raining. We tried to towel her off a bit but gave up - Pyr fur doesn't squeegie well, and she really didn't seem to be cold, so we didn't worry about it. We let her out about two hours later once it had mostly stopped raining. She was still damp and muddy, but seemed happy to hang around the house.

Our best guess is that she's afraid of thunder and managed to slip out of the front gate in an attempt to get away from it. She's never left the property before so this is entirely new. We are very fortunate that she didn't get hit by a car while trying to cross the road to Lowe's - she doesn't move very quickly with her arthritic hips. We're also eternally grateful to the gentleman who thought to look through her big poofy ruff for her collar - you almost can't see it because her fur is so thick - and called us to let us know where she was. I wish for good karma to follow him! 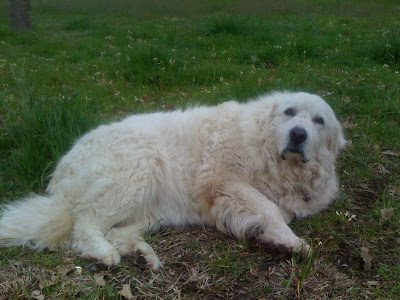 Still poofy and (sort of) white, even after this morning's expedition. 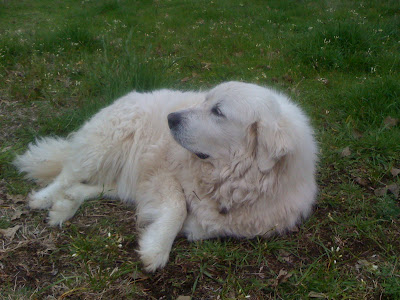 This evening she's quite stiff and moving even more slowly than usual, so she got a double dose of glucosamine and I'll be getting some baby asprin for her later on tonight. I guess the moral of this story is to keep her in if we know it's going to be thundering, and be aware that she may try to wander. We're also going to put up some wire on the front gate to close off that escape route.
Posted by jenj at 6:42 PM