A carport! With cars in it!

We spent several hours tonight cleaning up in and around the carport, and now... check it out. We can actually park cars in the carport! What a concept! 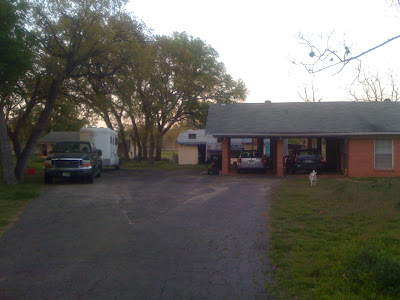 Look! Cars in the carport instead of horses! We must be getting civilized or something!

We moved the horse trailer to the far left of the drive so that there's room for another trailer that's coming in this weekend. We cleaned out all the shavings, mats, and panels from when the horses were in the carport during the super muddy/rainy weeks earlier in the year (watch, now it will rain for a week straight since I no longer have a place to put the horses out of the mud. Haha.) We moved the camper to behind the carport so that it's less obvious from the street. The hubby also moved a pile of lumber salvaged from the carport demo to under the eves of the guest house. Finally, I spent quite some time running the magnetic sweeper around at the edges of the asphalt to pick up any leftover nails and other metal bits, so that the horses won't step on them and we won't get them stuck in a vehicle tire.

Whew, it was a very productive evening!