Sunbeam snoozin' and a coyote

First off, yes, we've moved in. Mostly. But more about that in another post.

Today was my telecommuting day, so I enjoyed watching the rhythms of all the critters at the farmlet. Everyone was very active in the early morning, but by midmorning, things were slowing down.

And then the sunbeams came into the house, and it was all over. 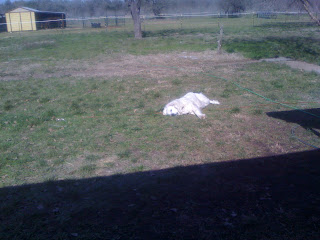 Anie, the first sunbeam victim. She alternated between sunbeams and the shade around the house. Sunbeams first. 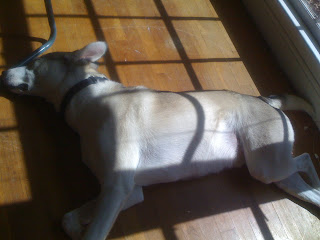 Elias never stood a chance. He passed out in the dining room next to my chair. 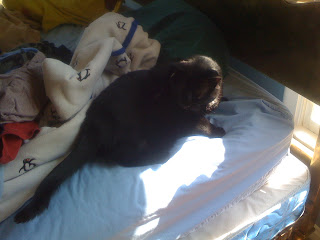 Bailey, my stepdaughter's cat. She managed to snag a corner of a sunbeam on my stepson's bed. 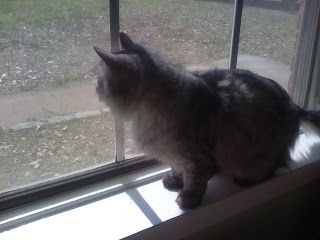 Freya watched the chickens from the comfort of a sun-drenched windowsill.
Alas, I had to make due with watching everyone else while I worked. I did take a few breaks to stroll around outside in the lovely 60-degree weather!

Today I also saw my first coyote - we've seen plenty of evidence that they're around, but never actually seen one. He (she?) was at the back northeast corner of the property, just outside the fence line on the greenbelt. The chickens were fortunately nowhere to be seen - I'm not sure if they were even awake yet even though we'd opened their coop. The coyote hung around for perhaps 30 seconds and then disappeared without coming onto the property. Interestingly, the mating pair of red-shouldered hawks that lives nearby were dive-bombing it, so I'm guessing they've got a nest going. Anie, of course, was out front, watching joggers go by. So much for a guardian dog!
Posted by jenj at 7:54 PM