One of my goals with this new house is to have a big, productive garden that provides a lot of our family's veggies during the growing season. Down here, this is spring to early summer, then we have a second season in the fall. From mid-June to the end of August it's just too hot and dry for much to survive, so that's the lean time. I know folks also grow stuff over the winter - our neighbor has some broccoli, swiss chard, and a few other things in her garden right now that made it over the winter, despite nearly three weeks of nightly light freezes.

At the old house, I had some success with lettuces, beans, and onions. Rats (it was a long, ugly battle and I lost) got my tomatoes, squash borers killed the zucchini, and most other stuff didn't do well because it was either too dry or the ground was too hard. So I'm a little discouraged by my lack of past successes, but am hopeful because the conditions here are entirely different.

First off, I have an actual garden area, complete with raised beds and soil that looks like it's been amended for at least a few years. It's got 5' of deer fencing (not nearly high enough, but we have Anie and she'll keep the deer off the property), and although it's small, it is a garden. Plus, it's got a few volunteer onions from last year, so I've got a head start on growing something!

In my spare time this week, I've been trying to get going on the garden. Ideally I would have 6 week old seedlings ready to put outside around March 15 (yeah, that was LAST WEEK), which is our last frost date around here. Since I'm not that with it, I'm going to have to settle for some store-bought plants and then seeing what I can start from seed and manage to grow before it gets too hot.

For starting seeds, I bought a mini-greenhouse for $40 from Lowe's. The seedlings will be kept inside in a sunny window until it gets warm enough to move them out. I'm using old cardboard egg cartons for starting seeds, since they're a heck of a lot cheaper than the little seed-starting kits. 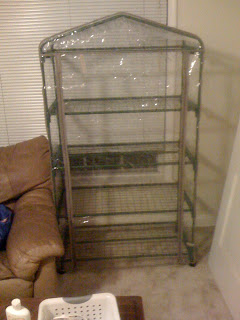 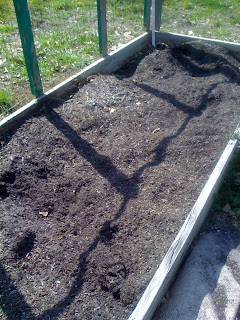 The garden is a bit odd. The bed on the left has great-looking black dirt... but there's nothing growing in it, not even a single weed. So I'm a little skeptical as to how well things are going to grow here. 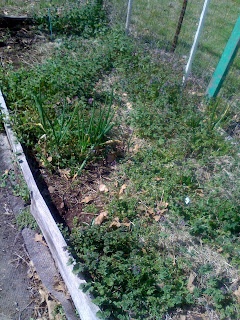 And then there's the bed on the right, which is overgrowing with weeds, although you can see the volunteer onions in the middle. There's maybe a 3' walkway between the two beds, which makes for easy access. 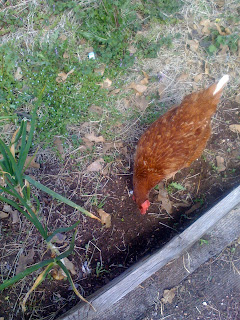 Saturday morning I spent weeding the right side of the garden, and invited a few of the hens in to snack on bugs. Chickens make excellent assistant gardeners - assuming they don't eat the earthworms!

Once the beds were weeded, I ended up scrapping most of the greenhouse plans and just started rooting through my seed packets and planting what I had. But more on that later once the plants start coming up.
Posted by jenj at 11:56 AM