Actually, this is more of an update of how everyone is healing rather than reporting new damage. About time too. 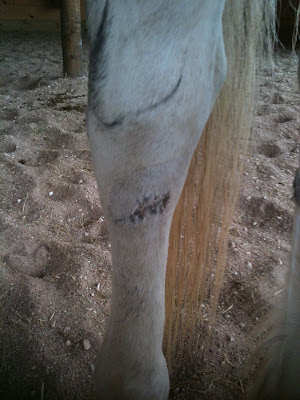 Taran's leg is healing well. He's going to have a scar where the stitches were, but I suspect in another month or two you'll barely know it's there. 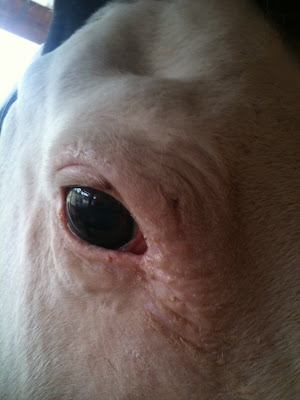 Cash's eye is looking good too. You can hardly tell where he cut it.
My back is doing much, much better. After any number of hours laying on a heating pad, not to mention loads of ibuprofen, it now spends its time mostly feeling just fine. As for having a cracked rib, I don't think that was ever the problem. Maybe I did have a rib out, I don't know, but I do know that carrying my laptop bag on that shoulder tends to aggravate it, and if my neck is feeling stiff my back starts to twinge too. I'm just paying a little more attention to my body and trying to keep the muscles loose, and that seems to be working. I still have one more laser treatment that I could go in for, but shockingly, I don't think I'll be going back to that particular chiropractor ever again. 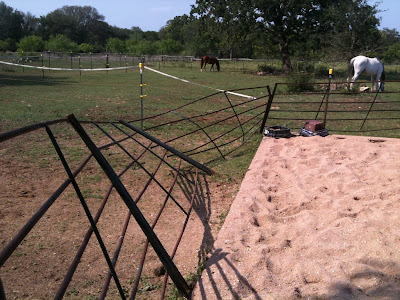 The only new damage is this beauty. As near as I can tell, Cash got crammed in the corner and in a bid to escape his tormentor (likely Taran), this was the result. Surprisingly, Cash only had a few minor scratches, and everyone else was fine. I suspect he jumped it. Not bad for an old man, but poor guy. The moral of the story is that Cash MUST be separated from everyone else (i.e. in the stall) if the boys have to be up for any length of time due to inclement weather. He's such a wuss.

Oh and today's heat index is something like 105. We even get a special weather statement! I've gotta get back outside and finish doing what I can while it's still reasonable. Yikes.
Posted by jenj at 9:25 AM