Before Cash is here too long and his feet change, I wanted to post pictures of his feet and compare them to Saga's. I'd also love to hear any advice on trimming for either of them.

Some background on Cash - he's been on 24/7 turnout in a 15+ acre pasture for the past three years. Footing is sand with Coastal (Bermuda) grass. Diet is grass with a daily flake of alfalfa in the winter and two cups of Triple Crown Senior morning and night. He's had no work, as he's been retired due to injury. However, he does appear sound today (WTC in the pasture, anyway). 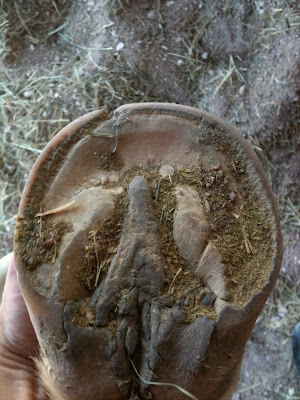 Left front. Seems like good white line but heel is really weak. Maybe the bars need a bit of trimming? 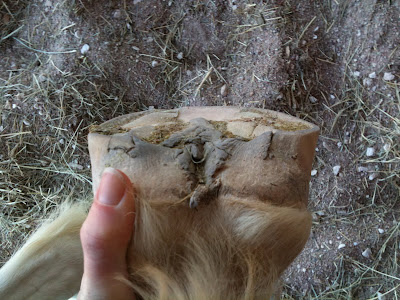 Left front. Nice and concave, and balance seems good for this horse - worn more on the inside than the outside. Again, the heel doesn't look very robust. 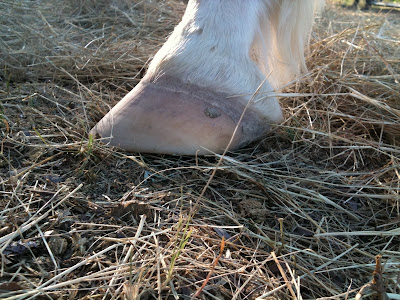 LF on the ground. I think the heel is underrun and the toe is not at the same angle as the coronet band. Yes? No?

I'm hoping to get a picture of him moving - he's always had a very odd way of going, almost smacking his front feet on the ground. I'm not sure what's causing it... maybe it's the hoof angle?

Now, on to Saga. He's been out of shoes for 1 year. He's on 12+ hours of turnout/day, and when he's "up," he's in a large sand paddock. He gets free choice Coastal hay fed through a slow feeder/haynet, 2 flakes of alfalfa per day, and minimal grain (more of a ration balancer). I've been playing with his feed for most of the last year and I think we finally have something that's low in NSCs but still keeps him nice and plump, as he tends to be a bit of a hard keeper. 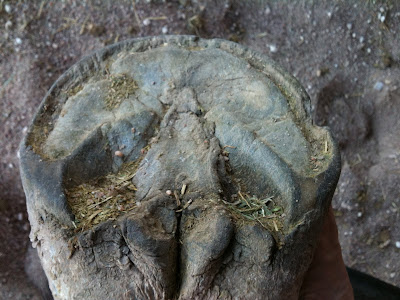 Saga, RF. Seems like his heels could come down a bit and maybe the bars need a bit of a trim. The hoof wall also seems long all around, but experience says that if I trim it back much, he'll be lame. Should I just do more of a mustang roll all around? 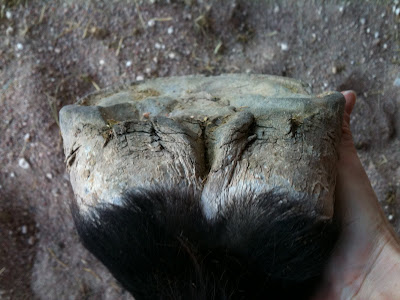 RF again. The inside of the hoof looks more robust than the outside. 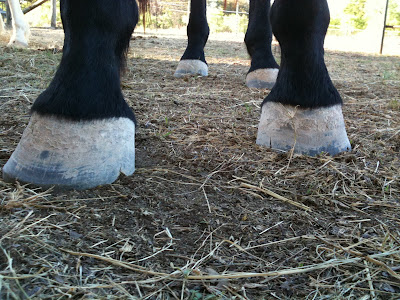 Unfortunately he's not standing squarely here, but he does graze with his RF forward. Note the event lines in his feet, as well as the flaring and chipping (again, indicators of hoof wall being too long and/or not balanced. What can I do to help it?). 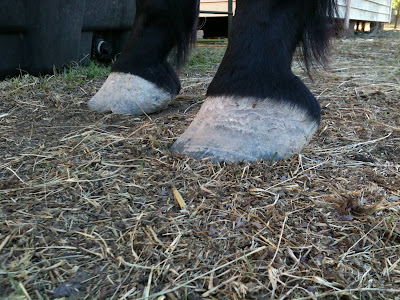 Here's a really good shot of how concave his front feet are. This is the reason I took his shoes off in the first place, to try to grow this out. A year later, he has still not been trimmed in such a way that his hoof angle is consistent all the way down. Would frequent (weekly or bi-weekly) yet small touch-ups with rolling the hoof wall edge encourage a proper angle?

Looking forward to hearing opinions and advice!
Posted by jenj at 7:06 PM