Nic's lovely posts (over at Rockley Farm) showing how feet change over time inspired this entry.
Taran is a 9 year old Fells Pony/TB cross. He's had front shoes only for the last 5 years, and until three weeks ago was boarded in a fairly conventional arrangement - in a stall at night, then outside all day, munching at a round bale. He really didn't get much exercise, and then it was primarily limited to an arena with nice footing.

Taran's perfectly sound. His owner, Fuzzypony, chose to pull his front shoes when he came to live at our house. He's got good, solid feet, we're not on rock, and she's not riding much, so keeping shoes on seemed unnecessary. He's been without front shoes for 3 weeks now, and has never in his life had hind shoes on. 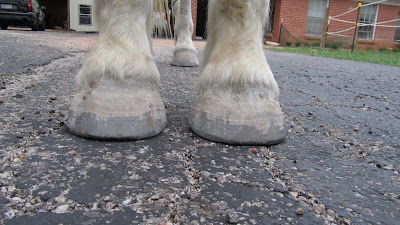 Taran fronts. If you look closely you can see where the event line is (about an inch down) from when the shoes came off. 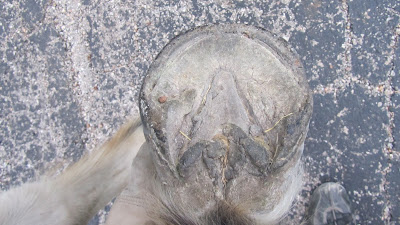 Left front. Frog is sloughing off. It's nice and wide, but the there's not much to the caudal hoof. 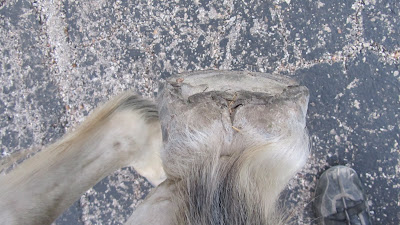 It looks like the heel needs to be trimmed (and it probably could be worn a bit more), but in reality, I think the caudal hoof needs to beef up. The deep split in the heel bulb also has me concerned - could there be thrush lurking in there? 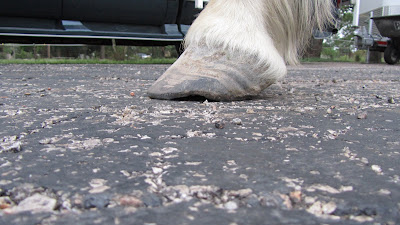 Same foot viewed from the side. The way the back of the hoof is being pulled under is really evident. 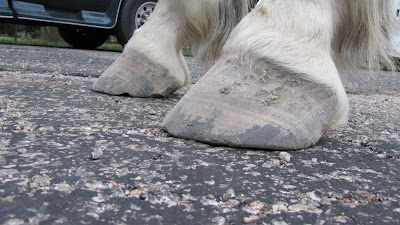 We took some video footage of him walking. The toe-first landing is really evident on the fronts. The LH lands more heel-first than the RH, which lands almost flat.

Interesting for a horse that has never been shod... is that a result of lack of exercise over stimulating surfaces? I would guess so, but I'm interested in what others think.
Posted by jenj at 6:07 PM