Whew! We just got back from Lysts on the Lake, got everyone fed and tucked in... time for a bit of a breather before heading back to our "normal" lives tomorrow.

Reddums was, as usual, a star. The hubby rode him in all three different competitions - a skill at arms (essentially the mounted games that medieval knights used for practice), a mounted melee' a cheval (a grand battle on horseback, with all 18 competitors fighting with rubberized swords - after you get hit 5 times you're out. Hitting a horse automatically disqualifies you.), and finally, the jousting. In this competition, jousting was for points - 1 point if you touch the shield but don't break the lance, 2 points if you break the lance on the body, and 3 points if you break the lance on the shield. Heads and below the waist are not legal targets.

I don't actually know how the scores in the skill at arms turned out, but the hubby was 4th in the mounted melee and was second overall in the competition. Overall it was in incredibly successful weekend and the hubby had lots of fun.

I didn't take many pictures because I spent all my time as a line judge, which essentially means I stood at the end of the jousting barrier and called the hits. The jousters are wearing so much armor that they can't often see or feel where the hit was made. As part of being a line judge, I also got to head some of the more excitable horses down the lane (imagine hanging on to a jazzed 1600 lb Percheron while waiting for the jousters to be ready) and act as a human stopping block for horses coming down the lane towards me. A friend of mine who teaches eventing showed up to watch and told me afterward that I was crazy - well at least I'm not the one up there with the lance! 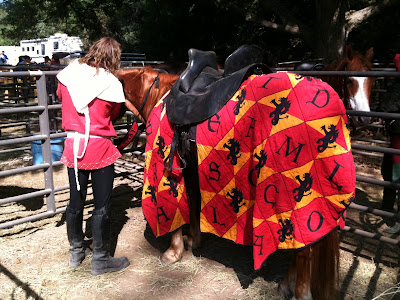 Here's the hubby getting Red ready for the skill at arms (no armor needed). Yes, I sewed the trappings that Red is wearing.


Azulox photography took some amazing pictures of the joust and the mounted combat. Since they are copyrighted (although we are purchasing a photo package, so we'll have ones to show here soon), I can only link to them. 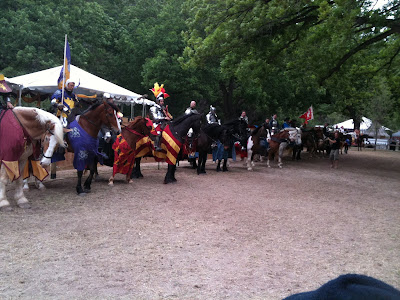 The final lineup at the end of the competition. Notice how small and cute Reddums looks in amongst all the drafts (Red is the 3rd from the left).

At the end of the day, the knights all did a mounted charge across the field. You can see the cameraman that they charged toward in the far left of the picture. (He said afterward that it was one of the scariest shots he'd ever taken - the ground was shaking!) 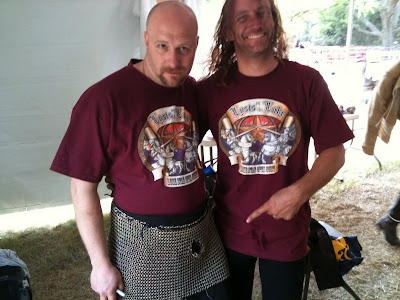 The very real dangers of jousting - my hubby (on the right) had a shot slip down off his opponent's shield and onto his maille skirt. You can see the hole the lance left in his maille, which he put back on just for this picture. The guy is fine and they had great stories to tell over dinner!

Reddums had a well-deserved massage and chiropractic adjustment after - he worked hard this week/weekend and was really a star. He had a good roll first thing when he got home, followed by a quick jaunt around the pasture before tucking in to dinner. And speaking of tucking in, I'm off to bed myself. It's been a long weekend!
Posted by jenj at 8:30 PM