This morning, the hubby, Fuzzypony, Foxfire, and I went foxhunting. It was Foxfire's first time out and I'm pretty sure he had a blast! 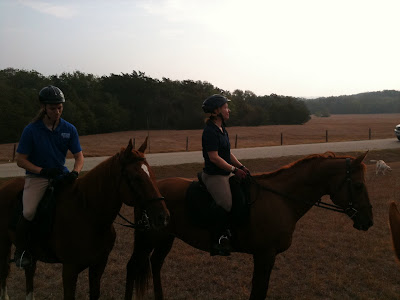 Foxfire (on his horse Ziggy) and Fuzzypony on Moose (a borrowed horse). We're waiting to get going... 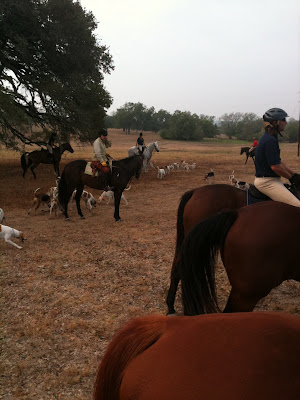 Everyone's all queued up and waiting for the hounds to catch a scent, except that they never really did. It's so dry that apparently the animal tracks are nearly "unsniffable". We didn't see any animals at all, but we still had a great time!

The four of us started off first flight, since the person leading second flight this week tends to lead fairly slow rides. Reddums and Saga were MUCH more manageable this time around - Red's frustrated rooting tendencies were all but gone, and I think he was very happy to have breaks in between the gallops. There were 9 people all told in first (not holding lines or with the hounds), and Reddums and I tended to stay toward the back of the pack, but he can sure keep up with the big boys when he wants to! The hubby had a much better ride on Saga as well, and the two of them are really starting to get along.

I discovered that when you go first flight, there are significantly fewer photo ops! 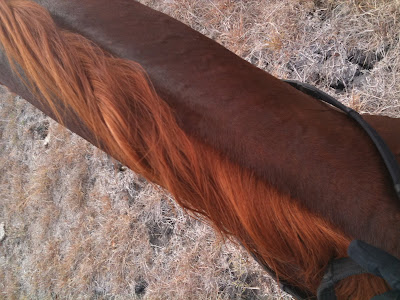 I often can't see what I'm photographing due to glare on my iPhone screen, so sometimes I end up with pictures of the oddest things. Here's a nice shot of Red's neck, lol!

The most exciting moment of the day (for me anyway) was when Saga's brand-new Easyboot Gloves self-destructed on a gallop. Saga was perhaps three lengths in front of us when I saw the pads go flying through the air, and then a boot when whinging past my head. It was sort of like being behind an 18 wheeler whose tires are destructing - I wasn't quite sure when the next piece of rubber was going to fly by! Of course we were galloping hell-for-leather at the time with no chance to slow down and deal with malfunctioning equipment, but as soon as we slowed up, I hopped off Red, pulled his boots off (one of them had come loose, but he's wearing Easyboot Epics and not Gloves), and checked Saga over for damage. Saga was fine, although the only thing left of his boots were the gaiters! We left Red's boots under a shrub and continued on (we did go back to get the boots later, and actually managed to find all the pieces of Saga's boots as well). Both horses did great without boots, so I think it the future we won't use them when hunting. All the hunt fixtures are quite sandy, whereas at home it's much rockier, so I think we will keep the boots for home use.

Last week Saga went out in his original Easyboots and came back with both of them firmly attached to his feet. I think the difference was that this week we did a lot more fast work and the Gloves are just not up for that. If we choose to hunt on rockier fixtures, I will definitely need to think about glue-ons again. 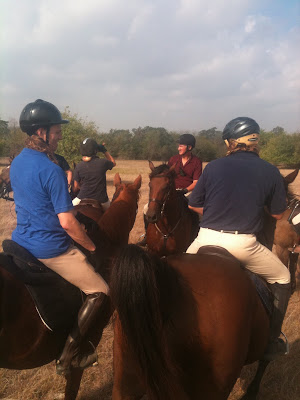 Because it wouldn't be foxhunting unless we passed the flasks around! 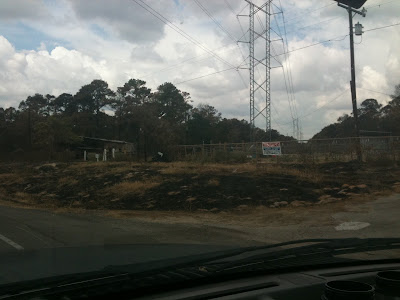 The most direct route to the hunt fixture from our house is through Bastrop, the area that had the huge (35,000) acre wildfire two weeks ago. Last weekend the roads were closed so we had to go around, but this weekend we drove through. The destruction was heartbreaking. Houses were burned to the ground, with only the chimney left. Others were still standing, but the ground and trees all around were scorched, sometimes literally up to the front door. The entire area smelled of smoke, and the landscape was surreal. Hats off to the firefighters and other personnel who risked their lives to stop this fire, and my heart goes out to all those people who lost everything. Central Texas is really banding together to provide help for those folks - we are truly a great community.

Unfortunately we won't be able to hunt again for the next two weeks, but I'm trying to convince the hubby to go the weekend after that... ;)
Posted by jenj at 12:07 AM