Other ways to torment your horses

Recently, we met a fellow rider who is interested in jousting. He actually rides at the barn where we used to keep our horses, so we got in touch with him through the barn owner.

We are usually very cautious about letting someone we don't know ride our horses, especially when they are interested in doing something like jousting. We've had a couple of really bad experiences, and we do try to learn from our mistakes. So, we met NH out for sort of a "screening" interview, and not only did he have great riding experience and seemed willing to learn, he was super-enthusiastic about jousting and anything else having to do with horses! So this weekend, we had him out to our house to demonstrate his riding skills (very nice!) and try his hand with some of the stuff we play with.

We put him up on Reddums to begin with, since Red is an old hand at jousting and mounted combat. In comparison, Saga has only practiced combat a few times, and has only done basic joust training (in other words, he's never had a lance broken against his rider). 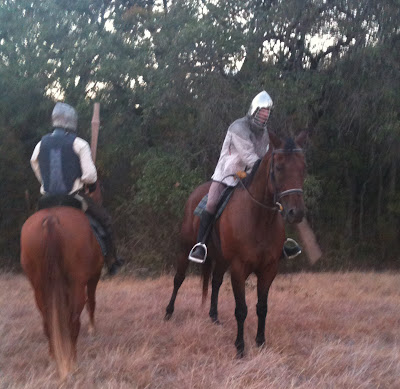 We started out with mounted combat work. Since Saga hasn't done this much, we started off by swinging a baton (rubber-covered rattan) all around Saga to get him comfortable with the concept. We also gently bump the horses with the baton (though it is instant disqualification if you ever hit a horse during actual combat) and have someone on the ground hit their riders as well. Many horses are oddly OK with being bumped but get really weirded out when their riders get hit! 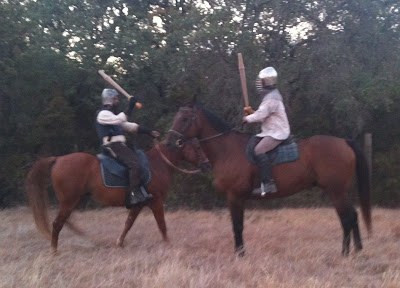 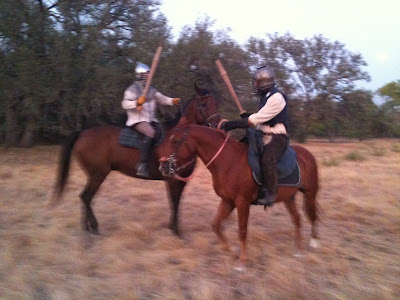 (Sorry for the picture quality - it was getting dark and I was using my iPhone). Once the boys were comfortable with the basics, the hubby and NH started to go at it for real. The biggest challenge in this game is to get into position for a good shot at the other rider. Only the waist up counts, and the arm/hand holding the reins is also not a target. 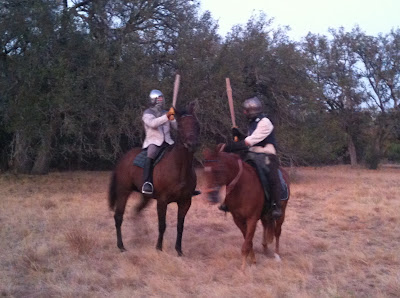 NH is circling Red around Saga looking for an opening. Saga's technique is to keep his head toward his opponent and spin in a circle. The trick for your opponent is to figure out another plan of attack - otherwise you both end up getting dizzy! 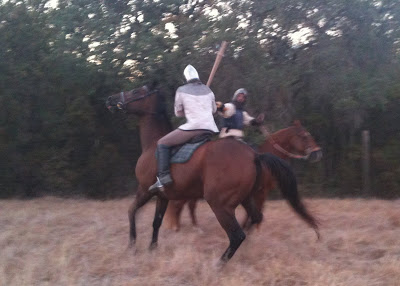 Saga has a moment where he's not so certain as the hubby spins him into position. Fortunately, Saga calmed down as the session went on. Good boy! 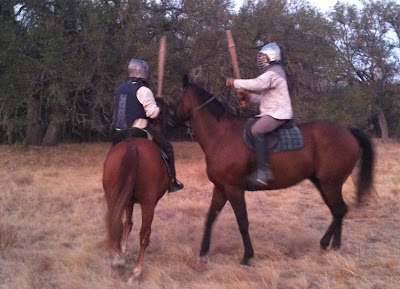 See? Keeping your nose to your opponent works well! Another trick that Saga uses is to rest his head in the opponent's lap, in hopes of having his ears scratched. Um, love your enemy? 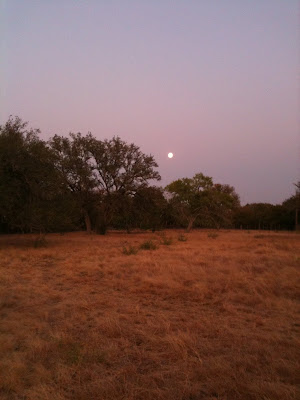 The guys were having so much fun, we were actually riding as the moon came up!

We finished up with a few practice jousting passes, but by then it was pretty dark. We're looking forward to the next time!
Posted by jenj at 9:13 AM