Home again, but still a card-carrying member of the lame pony club

Saga came home from the vet last night. Apparently he was much recovered from when I brought him in, although still not 100%. Despite blocking him to the knee, we don't actually know what's causing the lameness. At this point, we're treating him conservatively, with stall rest and 1 gram of bute daily. He gets handwalked for a week, then a week of tack walking, and if all goes well then I can start bringing him back into work.

Since Taran is still occupying the stall, we converted the barn aisle into a (large) stall for Saga. One of the things I did when planning the barn was to plan to make it modular, so this isn't quite as awkward as it might sound. The biggest issue is that my panels aren't quite the right size for the aisle (they are an awkward 9'8 inches, and the aisle is closer to 12' wide), and I never put in the hinges on the walls to mount the panels on. Oh well, we made do with what we have on hand. 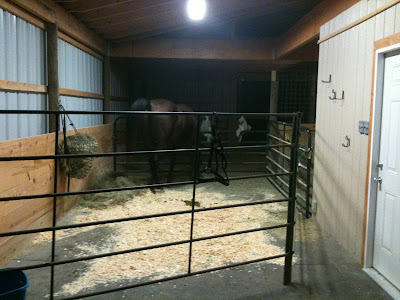 Not exactly the classiest setup ever, but it works. 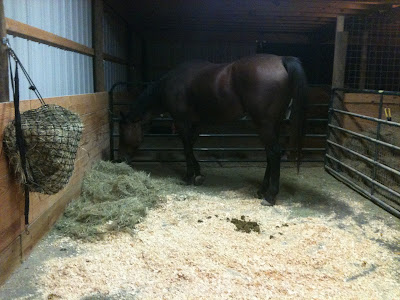 Of course, almost any suboptimal situation can be remedied with large applications of hay and alfalfa. Nomnomnom.
Unfortunately, Saga's still lame. I think he's worse today than yesterday, but that could be because he spent last night on sand instead of on stall mats. We did about a 20 minute hand walk and he was definitely short on the left front. I gave him 2 grams of bute tonight (instead of just 1) so hopefully that, combined with the stall setup in the aisle, will get him back on track. If he doesn't improve over the next few days... that's a tough call. As I understand it, the higher up in the limb you go the harder it is to pinpoint the problem, so it's not clear how much use more blocking his entire leg would do us. I'm considering calling out a vet I've used before who does acupuncture and massage/chiro work to see what she thinks. Hopefully a miracle will occur and he'll heal with stall rest though... keep your fingers and toes crossed!
Posted by jenj at 9:03 PM