In the past week, I've ridden Saga four times. Each ride we've gone a bit further and done a bit more. He continues to be sound and comfortable, even on very rocky areas, so I guess the shoes are helping him there.

Our rides start out with some walking on the trails, and then me asking if he'd like to trot. The first two rides he started off with lots of head-shaking and a very, very BIG trot (I'm talking like 250 mpm, at the trot... that boy can MOVE!). I sat in two-point with my reins loose, bridged over his neck in case he decided to do something silly. I learned quickly that I've got my leg too far back, since a few of his head-throwing maneuvers pulled me rather far forward. I pulled my stirrups up a few holes and pushed my leg further forward, and we seem to be in a better place for it.

There are a couple of directions we can go from the house. To the west, if I go under a (four lane) bridge, there's a couple of great areas for a nice long trot, or a good canter. There's also a spot that's a catch basin for drainage, but it happens to be perfectly flat at the bottom, fairly square-shaped, with ~10 foot tall sides. It's a nice area for a bit of dressage work. We went there three of the four times since there usually aren't any joggers out on those trails. The first time, Saga just wanted to trot. The second time, he chose to canter on the best canter spot - his big, ground-eating stride, even though we actually weren't going all that fast. Heaven!

The third time out, we cantered twice, and then he got a bit goofy out in the big field (there's a cute little pony that lives next to the field who was galloping the fenceline, which didn't help either!) So we went over to the catch basin and got in about 10 minutes of good trot work and a canter in each direction. He bucked/kicked out on the left lead canter depart, which is something he's done before - I think it comes from me asking too strongly to the left. He's very unbalanced in the canter both directions, quite sprawly, but I just tried to stay out of his way with the reins and help balance him a bit with my seat while keeping him moving forward. It was messy but we got it done. Yay canter!

Today was the fourth ride. He felt pretty quiet right out of the barn, I think because it was 80 degrees out (November weather, where are you???). Still, he was game for a trot, and this time we decided to head north instead of west. Just after we got going, we went past this: 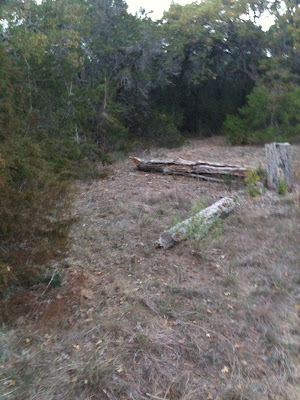 Approach? Who needs one!

I eyeballed the log, decided that if we came in from a slow trot we could squeeze in a bending approach (in between the mesquite trees and the cacti, mind you) and presto! Over we went. He never batted an eyelash and certainly didn't behave like we hadn't jumped in almost a year (!?!?!). We popped over it once more for good measure (and hey, this time I remembered to keep my heels down) and went on our way for a few strides at a nice canter. We came back down to a walk and continued on the trails, making for an open field about a 10 minute ride away.

Once we got there, we had two nice canters on a ~40 meter circle. The right was more balanced than the left, and to the left he had a tendency to tip his head and set his jaw. Again, nothing new, and I think it was more due lack of balance than him being naughty. I rode with a soft hand and just asked him to keep moving forward, and eventually he came back together. We also had a few nice minutes of trot, where I focused on using my core to keep his rhythm slow and steady. I always feel like he's taking such tiny steps when I ride that way, compared to the huge trot he has out on the trails when he really opens up. I'm sure we'll be able to get those big steps one day, but for now I just have to remember to help him stay balanced.

The walk home in the dusk was mostly uneventful, although he did develop this enormous almost lateral walk. Instead of the even 1-2-3-4 of a walk it was more 12-34. Still 4 beats but different. I also found reason 85140 to wear a helmet - in the event your horse almost steps on a rabbit, your helmet will protect your head from any looming tree branches when your horse spooks upward three feet. Despite that one bit, he was 100% solid even though it was nearly pitch black by the time we got home. What a good boy!

It's been nearly a month since the shoes were put on (the first time), so it's time to regroup with the vet and see where we're at now. Given how well he is doing, I am sorely tempted to stick with the shoes. I really, really want to hunt more this season. Jumping today was amazing, and heck, it's fantastic to just be able to RIDE my horse without the constant worry/fear that he's not comfortable. I guess I feel like if we can get him to grow more sole, and if we can get the laminitis under control, I am fine with him wearing shoes. I just don't want them to mask an ongoing underlying problem. We'll be taking x-rays before the next set of shoes so we'll know better how his feet are doing internally, so until then, I will continue to keep our canter and trot sessions short, and I won't jump him any more. 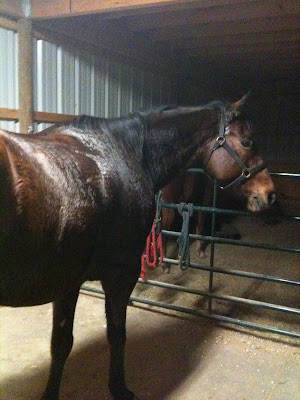 Addendum: I think I'm going to clip him, for real - he was soaked tonight after our ride. The weather forecast for the next 10 days is a high around 80 degrees every day - he's just got too much hair for that kind of weather!
Posted by jenj at 7:30 PM