Taran is almost exactly 5 months out from his injury, and his recovery is nothing short of a miracle. He has good days when he looks 100% on the RF, and days when he's a little short. Fuzzypony does a lot of walking with him, and some T/C under saddle on the weekends (it gets dark too early to do much on the weekdays, as we don't have a lighted arena).

What's really amazing, though, is how sound he actually is on all surfaces. If you look at his feet, you'd swear he'd be the next thing up from dead lame. 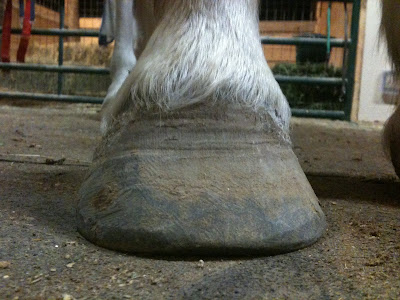 RF. You can see where the injury and subsequent surgery occurred on the first event line, halfway down the foot. From the front it doesn't look too bad - well, ok, if you don't look at the medio-lateral balance and the flair. 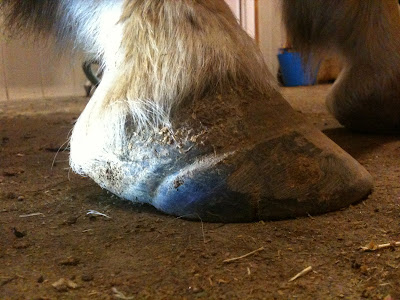 But viewed from the side, we see a more dramatic story. The event line is nearly 1/2 inch deep, and the heel is incredibly underrun. 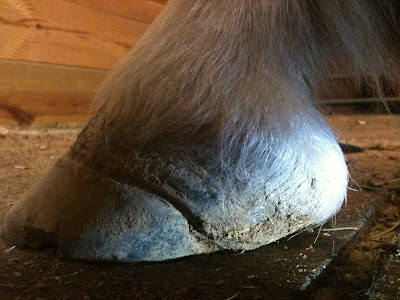 The event line is even worse when viewed from this side. The surgery, combined with a hospital plate and 4 months of stall rest, have caused impressive changes in the hoof. 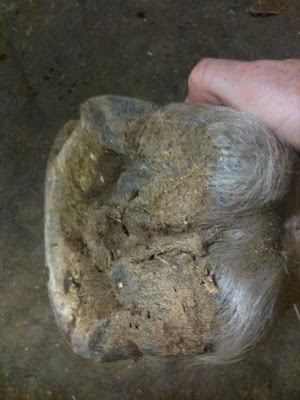 From the bottom, the event line is so severe it almost looks like it's from two separate hooves. The foot is thrushy (we are working on this daily), the caudal hoof is poor, and the heel is... er, somewhere around there... 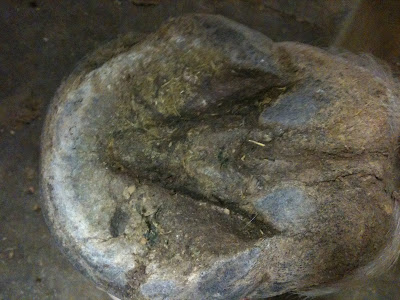 Another view of just how underrun the heel is. You can also see where he's wearing the caudal hoof - it's getting some stimulus for sure, but in a really odd place.

I'm curious to see what other hoof nerds have to say about this foot - I've only pointed out what I've learned to recognize from all the experts out there, and I'm sure there are lots of things I've missed or gotten wrong. What continues to amaze me is how well he is doing, on everything from sand to the road to the trails with rocks. Despite all the challenges he has with his foot, he's pretty darn sound. Makes you wonder why some horses with relatively good-looking feet can't handle anything but the softest of surfaces, while horses with feet like Taran's can stomp around on a surprising variety of substrates. Any thoughts?
Posted by jenj at 10:05 PM