It's more than a little disconcerting when your normally-full hay storage looks like this: 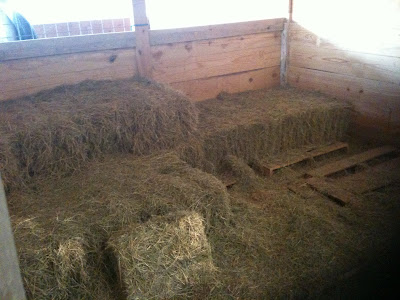 This was last week, when I had 15 bales left.

Today, I had 1.5 bales left, and I usually go through 2 bales per day, more or less. I made an emergency run to the feed store... and I had to call FOUR stores before I found one with any coastal hay. They only had about 40 bales, so I snagged 15, including 4 for my neighbor.

The good news is that on Sunday, a semi truck load of Orchard Grass hay is arriving from Ontario, Canada. It's the first time I've ever ordered hay on my own and not gotten it directly from the feed store, but for $10/bale (delivered, and compared to $15/bale from the feed store), it's totally worth it.

It took quite a lot of legwork to make this happen, since I didn't have a supplier or really know of one. I emailed a number of blog friends (you know who you are!) and horsey contacts (including a barn I boarded Cash at up in New York!) to get recommendations. Finally, the lady that runs the hunt that we ride with said that she had just ordered a semi-load of very nice hay from Ontario, and got me in touch with the guy she bought it from.

A semi-load is the only way they'll ship hay, so the question became what to do with 840 bales of hay? Much as I would LOVE to put up that much (it would last me about a year), I only have room for roughly 150 in my hay storage, and maybe another 100 if I cram some in various spots. If I wanted to give up my barn aisle, I could stash an additional 300, but it would be fairly inconvenient not to have a barn aisle for 6 months while the boys ate their way out. Not that they would mind!

In an effort to find buyers for the other 500 or so bales of hay that I can't store, I contacted all of my friends in the area that keep their horses at home. Apparently the ability to store 250 bales of hay is a luxury, as most folks don't have room for more than 20-30 bales. I guess we planned the barn better than I thought! Anyway, I couldn't find enough takers for the rest of the hay, so I called my favorite feed store and asked the owner if he'd be willing to split the load with me. He said he would if the hay was good, but he wanted to see it first.

So we took a little road trip to the hunt owner's barn (1.5 hours away) to pick up a hay sample. Alas, we didn't get in any hunting while we were there. Fortunately, the trip was worth it - the hay was nice enough that the feed store owner agreed to take whatever of the load I couldn't store. He also agreed to use his tractor to unload it - something I was definitely not prepared to do by hand!

All that remained to be done was a wire transfer of the funds to the hay grower's bank in Ontario - which sounds fishy, doesn't it??? We even checked into getting the load of hay insured just in case something happened between Ontario and here, but apparently that kind of insurance is only available for commercial carriers. Sooo... after wiring an obscene amount of money to Canada, we now have our fingers crossed that the hay will show up as scheduled sometime this Sunday.

'Cause otherwise Red's gonna starve and all.

* The reference is to this song by REM. Which has absolutely nothing to do with hay, really.