How you know your horse has a mineral deficiency

Remember I mentioned that we think Saga's issues with a thin sole and the event lines are diet-related? I now know he's definitely got some sort of mineral deficiency, or else he wouldn't be doing this: 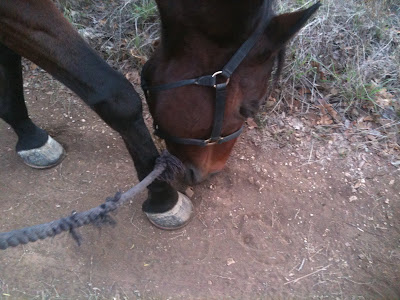 Mmmmmdiiiiirt. I know it doesn't look like much here, but he was actually scraping the ground with his teeth and licking it up. Um?
Anyway, he found this particularly tasty spot on one of our hand walks on the trails behind the house. I've never seen him eat dirt in the pasture, so maybe this spot had something extra delicious? The soil was quite red, so I'm wondering if he was after the iron. The soil here is also rich in calcium (we're on a prehistoric deposit of tiny sea critters, which form limestone), but I doubt he was after that, since he gets both alfalfa and beet pulp which are both high in calcium. If I can find the spot again, I may get the soil tested just to see.

Then just a few days later, JD (who comes out to help sometimes and I love her!) sent me this picture, taken while she was mucking Taran's stall: 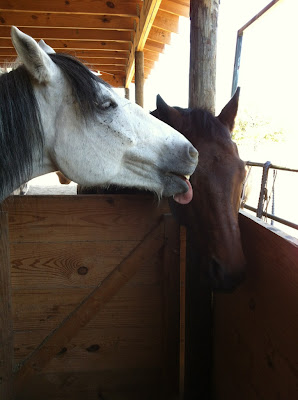 I shall leeeck your eyeball!
Taran has been known to lick Saga before, so maybe he just likes to do it. However, he usually goes after sweaty/salty spots, so I suspect that he's sodium deficient.

The odd thing is that during the summer, the boys get 1 tbsp of salt per day in their feed. They also have a mineral block, which they never touch (?!?!?). So, what gives?

I'm working with my vet to schedule a blood draw to do a mineral analysis on Saga. In the meantime, I've started providing free-choice loose salt... and there are suspicious nose prints in it every time I check (2x daily), so I know they're making use of it. Yay! Magnesium is apparently another mineral that horses are often deficient in, and their bodies can get rid of any excess. So I purchased a feed-grade bag of Magnesium Oxide, and each of the boys gets 3 tbsp (~45 g) per day mixed in with their feed. There is some indication that magnesium-deficient horses (or just horses with mineral imbalances in general) are more susceptible to changes in diet, which in turn affects their feet. So it will be interesting to see if these changes in feeding habits affect Saga's feet in a positive way.
Posted by jenj at 6:51 AM