We headed out for a nice long ride this afternoon, just Saga and I. I spoke with my vet yesterday and she cleared us for light jumping, so I was on the lookout for anything that looked jumpable.

First, we headed over to our current favorite canter spot. I mentioned in an earlier post that we have to go under a bridge to get there - here's what I was talking about. 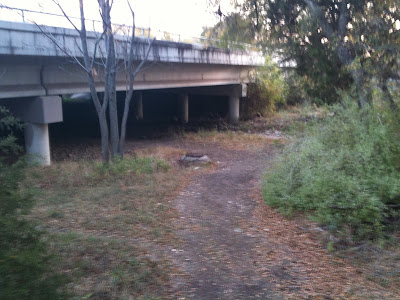 It looks scary, doesn't it? But none of the boys ever bat an eyelash going under, not even at dusk. Maybe they know there are no trolls? 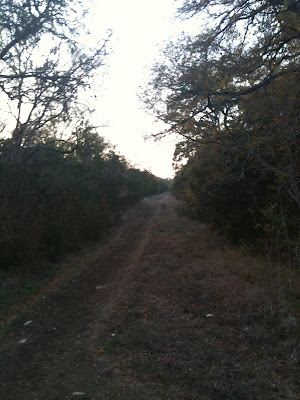 And here's our canter lane. It's over with surprisingly fast.
After a good WTC warmup, we stopped by the retaining pond that doubles nicely as a dressage court. Yeah, it's square-ish, but it's flat with no mesquite shrubs, and the footing's pretty decent. 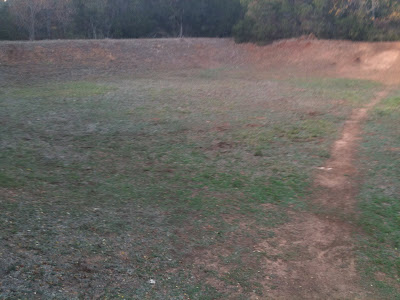 Not exactly the perfect dressage arena, but it works for us backyard folks.
We did about 10-15 mins of WTC both directions. At the trot, I worked a lot on getting him more collected by holding him with my core while being soft with my hands. I was hoping that getting him to sit back a bit more would help with our canter transitions and maybe encourage a bit more balanced canter, and it seems to have worked. Our right lead canters (2x) were quite nice, and our left lead was much improved. The first left canter depart I tried to ask much more lightly but still got a buck/kick, so I tried again with even less. I felt him hunch his back and we aborted the depart, and then I resorted to saying "Can-TER" and stepping a bit more in my right stirrup and sort of rolling my ankle into him. He ran for a few steps and then fell into the canter, but without the kick. We tried twice more and took a few running steps each time, but since he wasn't offering to kick I figured it was an improvement. I think I'm doing something with my right leg/seat that really bugs him - left canter is the only time he ever does this. He's completely fine once he gets going, and he doesn't do it out in the pasture, so I'm pretty sure it's me. Anybody got any ideas?

After our short dressage go, he was soaked with sweat and blowing (it was 84 degrees today). Apparently the bib clip I did on Tuesday didn't help at all, so I think we're going to have to do something more drastic to keep him cool. We walked for the next 45 minutes while I looked for Things To Jump... 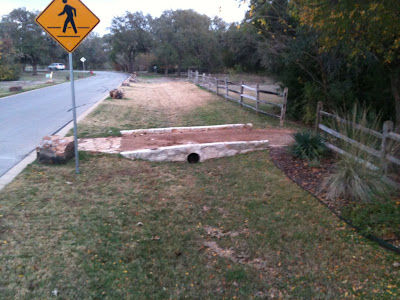 ... and I noticed this culvert.
Ok, I would be lying if I said I hadn't noticed the post-and-rails fence first, but it's too big for us right now, and the approach would be a challenge to say the least. Hopefully someday, though! Today, we just did the culvert as a tiny bounce. Saga was a star and quick on his feet, although the second time through I was a little worried that he'd jump the whole thing since it's fairly narrow. He managed to keep it bounce-like, though, and then thought it was so much fun that he threw his head around and insisted that we should find something else to jump. It was getting toward dusk, though, and he was still wet, so we headed for home.

On the way, I found a tiny bench (really just a log with feet) with a do-able approach - but it's maybe all of 4 feet long so I would have to ride REALLY straight to get us over it. There's also a stone retaining wall, and another bench that could work... I need to do more reconnaissance! I may also talk to the city to see if they are willing to leave some logs where they fall (or are cut) as small jumps - that would be SUPER fun!
Posted by jenj at 8:47 PM